What’s the difference between karats and carats? Are they the same? 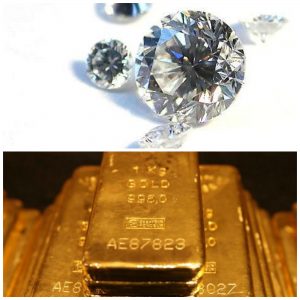 Carat vs Karat: A carat is a unit of gemstone mass equal to 200 mg, while a karat is a measure of gold purity. (photos: Mario Sarto, Agnico-Eagle)

The terms karats and carats are both used to refer to bling in the jewelry trade and in geology, but the words don’t mean the same thing.

A carat is a unit of mass used in the jewelry industry to describe the weight of diamonds and other gemstones. One carat is equal to 200 milligrams or 0.2 grams. To put this into perspective, a pound is 453 grams or 2264 carats. A 2-carat diamond would weigh 400 mg. Gemstones have different densities, so 1 carat of one stone might be larger or smaller in volume than 1 carat of another material. A carat may be divided into 100 points, each with a mass of 2 milligrams. The abbreviation for carats is CT or ct.

A karat is a term used to describe the purity of gold. A karat is 1/24th of a portion, so 24 karat gold is pure gold. 14-karat gold is 14 parts gold and 10 parts other metals. 18-karat gold is 18/24 parts gold or 75% gold. Pure gold is very soft, so it’s usually mixed with other metals to form an alloy that’s hard, less expensive, and sometimes has a different color. The abbreviation for karat is K or k, as in “14k gold”.

The word carat comes from a Greek word, meaning “carob seed”. The seeds were units of weight for small objects, as measured on balances. The carat came into use for measuring the weight of diamonds in the 1570s. While some people surmised carob seeds were used because they were uniform in weight, this isn’t actually true. The size and mass of these seeds varies about as much as for other species. Until 1907, the mass of a carat varied from one country to another, ranging from 187 mg in Cyprus to 216 mg in Livorno. The unit was standardized to become the 200 mg metric carat, which is the unit used today throughout the world.

“Karat” is a variant of the word “carat”. There is no recorded mention of carob seeds ever being used to measure gold. At some point, the gemstone mass term and gold purity term diverged. In 309 CE, the Roman emperor Constantine I minted gold coins that were the mass of 24 siliqua, where a siliqua or carat was 1/1728 of a libra or pound. This is probably the origin of the use of 24 parts for karats. The term karat is only used to describe purity or fineness of gold. It is 24 times the pure mass divided by the total mass:

where K is the karat rating, Mg is mass of gold, and Mm is total mass.