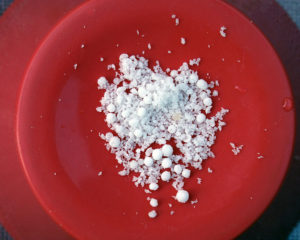 Ammonium nitrate is a chemical compound used in agriculture and to make pyrotechnics or cold packs or to perform other interesting demonstrations. It’s also used to create controlled explosions in mining and quarrying. It was once mined as a natural mineral in the deserts of Chile, but it is no longer available except as a man-made compound.

While it is not difficult to make ammonium nitrate, be advised it is dangerous to do so as the chemicals involved can be hazardous. In addition, ammonium nitrate becomes explosive when mixed with fuels or other chemicals.

HOW TO MAKE AMMONIUM NITRATE 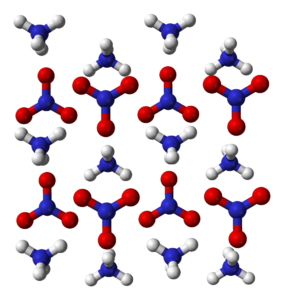 Natural ammonium nitrate is called niter. It is analogous to saltpeter, which is natural potassium nitrate. (Ben Mills)

The chemicals used in this project are smelly and corrosive, so this project should be performed under a fume hood or outdoors. As always, wear gloves, eye protection, and appropriate clothing.

Some of the reagents and the final product are flammable or are oxidizers, so keep the chemicals away from open flames.

One thought on “How to Make Ammonium Nitrate From Household Chemicals”