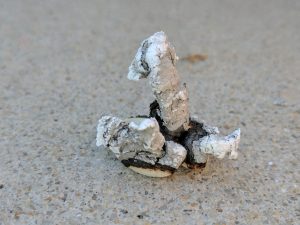 Black snake fireworks are also known as Pharaoh’s snakes, Pharaoh’s serpent, or glow worms. Although called “fireworks” they are a type of small pyrotechnic that doesn’t explode or even give off sparks. When you light a black snake, it pushes out a column of ash that sort of resembles a snake. You can buy black snakes (and they are usually inexpensive), but they are a lot of fun to make yourself. One big advantage of homemade black snakes is that you know exactly what is in them. In the past, these fireworks could contain toxic chemicals, including deadly arsenic!

I have a popular tutorial for making black snakes using baking soda and sugar and another (which should be restricted to the realm of chemistry demonstrations) for Pharaoh’s snakes based on mercury(II) thiocyanate, but there is an even easier non-toxic way to make them. 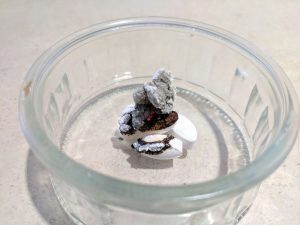 The calcium gluconate black snakes will burn on their own if you get them hot enough.

All you need are calcium gluconate powder or tablets. Calcium gluconate is not a great calcium supplement because of its low absorption, so you may or may not be able to find it at a local pharmacy, Walmart, etc. I went online to get it from Amazon

. Be sure to use “calcium gluconate” and not “calcium glucarate”, which is a different chemical. There are different doses available. I got 300 mg calcium gluconate that used starch as a binder. Starch is a carbohydrate, so it burns. Sometimes drug manufacturers use talcum as a binder, which will not burn, so if you’re spending your hard-earned cash for a science project, you might want to take a look at what else is in the pill.

Turning the pills in black snake fireworks is easy. All you have to do is light them on fire! However, they don’t burn as vigorously as certain other kinds of black snakes, so you can improve the performance by:

What I did was apply a lighter to the tablets. While the tablets eventually catch on fire to make a self-sustaining snake, it’s much easier and more dramatic if you can supply a constant flame. Unlike some projects, there isn’t much smoke and it doesn’t smell terrible. You should be able to do this one indoors (on a heat-safe surface) without setting off the smoke alarm. Of course, since flame is involved, it’s probably better to do it outside. Whatever works for you.

Here, Crazy Russian Hacker shows what to expect with both calcium gluconate supplements (looks like the same brand I have) and crushed tablets.