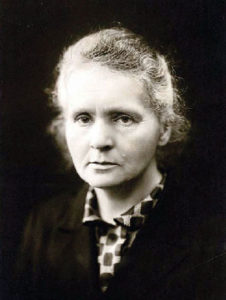 Marie Sklodowska-Curie, also known as Marie Curie, Polish and naturalized-French physicist and chemist Nobel Prize in Physics in 1903 and in Chemistry in 1911.

Marie Curie is best known for discovering radium, yet she achieved many more accomplishments. Here is a brief biography of her claim to fame.

Marie Curie pioneered radioactivity research, She was the first two-time Nobel laureate and the only person to win the award in two different sciences (Linus Pauling won Chemistry and Peace). 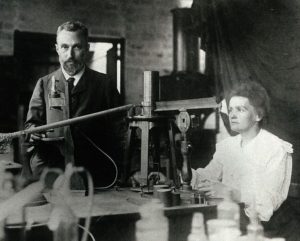 Pierre and Marie Curie in the laboratory (circa 1904)

Maria Sklodowska was the daughter of Polish schoolteachers. She took work as a teacher after her father lost his savings through a bad investment. She also participated in the nationalist “free university,” in which she read in Polish to women workers. She worked as a governess in Poland to support her older sister in Paris and eventually joined them there. She met and married Pierre Curie while she was studying science at the Sorbonne.

In 1903, Pierre Curie, Marie Curie, and Henri Becquerel were awarded the Nobel Prize in Physics, “in recognition of the extraordinary services they have rendered by their joint researches on the radiation phenomena discovered by Professor Henri Becquerel.” This made Curie the first woman to be awarded a Nobel Prize.

In 1911 Marie Curie was awarded the Nobel Prize in Chemistry, “in recognition of her services to the advancement of chemistry by the discovery of the elements radium and polonium, by the isolation of radium and the study of the nature and compounds of this remarkable element”.