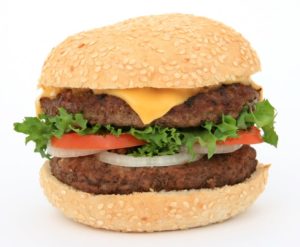 While lettuce and tomato may get slimy, a burger made with a bun, meat, and cheese won’t rot.

If you’re up for a bit of scientific experimentation, you can get a McDonald’s hamburger, leave it on the counter, and prove to yourself it won’t appear to rot or decompose over time. Alternatively, you can skip the experiment and trust me on this, as a parent of a child who would hide burgers from Happy Meals in the car. Even if it takes weeks to discover the burger, it looks pretty much the same as the day you ordered it. I can’t say whether it tastes the same. I doubt it. The point is, there is a lot of data out there indicating the basic burger appears to be immortal. This is not true of the Quarter Pounder or Big Mac and here’s why…No, it’s not some crazy preservative. It’s not caused by the presence of any unwelcome chemical at all. Rather, the burger and bun appear unaffected by time because they contain low levels of water. Moisture is required for the bun or burger to mold. Thin hamburgers have a high surface area to volume ratio, so they lose moisture readily.

When a burger gets left out, it becomes dried bread and jerky. The condiments contain enough acid (ketchup) or salt (mustard, pickle) that they don’t rot, either.

In fact, the phenomenon isn’t specific to McDonald’s burgers. If you’re willing to sacrifice a burger, make one yourself, using a simple bun and the same condiments. Make sure the burger is thin, like an inexpensive fast food burger, and cooked completely, since fast food places are pretty good about preventing illness from undercooked food. Leave your test burger on the counter. If you like, get a McDonald’s burger and compare their appearance over time. Are you surprised your fresh, homemade burger appears immortal? You’ve just created a burger mummy! This is much the same process used to preserve meat to make jerky. The burger is dehydrated protein, with a bit of fat. Most of the fat was removed during cooking. The bit that remains may eventually taste rancid, but its appearance won’t change. Gross? Not so much, when you stop to think about it.

What’s gross is what you get if you seal your homemade burger or the McDonald’s burger (or any burger) in a plastic bag. Moisture won’t be able to escape, so the conditions will be suitable for mold and bacteria to multiply and rot the bun and burger.