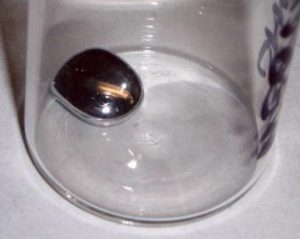 Mercury is a heavy silvery metal that is liquid at room temperature. In the Mercury Beating Heart experiment, a drop of mercury pulsates rhythmically, like a beating heart. Femto/Elementbox04

A drop of mercury is placed in a watch glass. The mercury is covered with a solution of an oxidizing compound in sulfuric acid. The oxidizer usually is potassium dichromate, hydrogen peroxide or potassium permanganate. An iron nail or wire is placed such that the tip of the nail is almost touching the mercury. The mercury will begin to pulsate rhythmically, like a beating heart.

How the Mercury Beating Heart Works

The mechanism for this reaction is not clearly understood, but it may involve oxidation of the iron. The permanganate, peroxide or dichromate oxidizes the mercury to produce mercury(I) ions which combine with sulfate ions from the sulfuric acid to form a thin layer of mercury(I) sulfate on the surface of the drop of mercury. The formation of the layer reduces the surface tension of the drop, causing it to flatten out. When the flattened drops contacts the iron wire or nail, the mercury sulfate oxidizes the iron to form the iron(II) ion while reducing the mercury to its normal metallic form. The mercury has a higher surface tension, so the drop becomes rounded again. As contact with the iron ceases, the oxide coating starts to form again, repeating the process. When all of the oxidizer has been reduced, the reaction stops. There is some debate about the mechanism because weaker oscillations have been observed even without the presence of oxidizer.

Mercury is very toxic, so you may wish to perform this demonstration with another material. It turns out molten gallium may be substituted for the drop of mercury. Gallium will melt at a low temperature and is much less toxic/easily contained than mercury. To perform the demonstration with gallium, melt a pellet of gallium and immerse it in sulfuric acid. Add a small amount of an oxidizer, such as potassium permanganate, to the sulfuric acid. The gallium heart will be more slowly than the mercury heart.

It’s much safer to watch a video of this demonstration than to do it yourself. Here’s what happens…