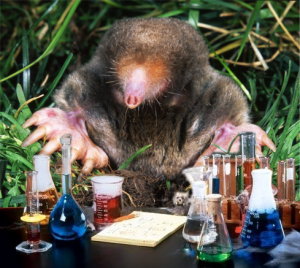 This chemistry mole would be better suited as a mascot for Mole Day than the actual mole unit.

Moles in chemistry have nothing to do with the small brown/gray yard pests that dig under your flowers and lawn or a tasty sauce on a Mexican dish. A mole in chemistry is a SI unit of measurement. The mole unit describes the amount or number of things. The standard mole is defined as the number of atoms in 12 grams of the carbon isotope, carbon-12.

More commonly, 1 mole (abbreviated mol) is equal to 6.022 x 1023. This number is known as Avogadro’s number. The mole has no units. It just describes the number of something.

It is much easier to write 1 mole than 6.022 x 1023. The mole unit is a convenient means to convert between atoms and molecules and mass of those atoms or molecules. Moles are important enough to chemists that they celebrate Mole Day on October 23 (10-23).

Mole Example Problem #1: Find the mass of a single atom.

Question: What is the mass of single atom of nitrogen?

Mole Example Problem #2: Mass of a known number of molecules.

Question: What is the mass in grams of 5 billion water molecules?

Mole Example Problem #3: Finding the number of molecules in a given mass.

Question: How many water molecules in 15 grams of ice?

Step 2: Use Avogadro’s number in a ratio.