Home » Science Notes Posts » Measurement » How Much Does a Gallon of Water Weigh? Easy Calculation

Question: How much does a gallon of water weigh? 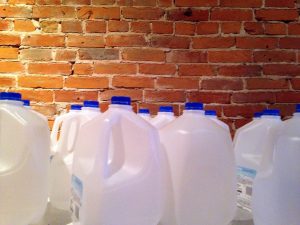 Ballpark Calculation (for all temperatures)

It makes a difference which unit of gallon you are using. There are two US definitions of gallon. The US liquid gallon (most commonly used) is defined as 231 cubic inches, which is 3.785 liters, and weighs 8.344 lbs at its highest density.

The UK gallon or imperial gallon originally was defined as 10 lbs of water, but the modern definition is exactly 4.54609 L or 10.02 lbs of water at its maximum density.

Effect of Water Temperature on Weight

Cold water is more dense than ice or than warm water or liquid just above freezing. This is an unusual property of the substance, resulting from hydrogen bonding. So, a gallon of warm water would weigh slightly less than a gallon of cold water. The exact difference would depend on the temperatures in question, but it doesn’t affect the value by much.

Of course, gravity affects weight too, so a gallon of water (or anything else) would weigh more on Jupiter than on Earth, while it would weigh less on the Moon than Earth.

Easy Way To Remember the Weight of Water

While you’ll want to keep the exact volume definitions in mind for scientific calculations, for everyday use you can remember the weight of water using the simple rhyme: A pint’s a pound, the world round.

The saying refers to the rough equivalence between 16 fluid ounces (a pint) and 16 ounces avoirdupois weight. A gallon is 4 quarts or 8 pints, so a gallon weighs approximately 8 lbs.

One thought on “How Much Does a Gallon of Water Weigh? Easy Calculation”