Home » Science Notes Posts » How Stuff Works » Nitrogen Versus Air: Which Is Better in Tires? 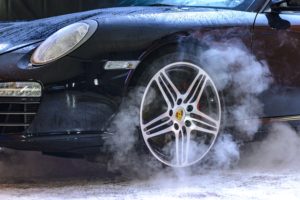 Nitrogen is necessary for race cars and beneficial to regular automotive tire performance, too.

Why Nitrogen Is Better Than Air

There are multiple reasons why nitrogen is preferable to air in automobile tires:

To understand why, it’s helpful to review the composition of air. Air is mostly nitrogen (78%), with 21% oxygen, and smaller amounts of carbon dioxide, water vapor, and other gases. The oxygen and water vapor are the molecules that matter.

Although you might think oxygen would be a larger molecule than nitrogen because it has a higher mass on the periodic table, elements further along an element period actually have a small atomic radius because of the nature of the electron shell. An oxygen molecule, O2, is smaller than a nitrogen molecule, N2, making it easier for oxygen to migrate through the wall of tires. Tires filled with air deflate more quickly than those filled with pure nitrogen.

Does It Really Matter?

Is it enough to matter? A 2007 Consumer Reports study compared air-inflated tires and nitrogen-inflated tires to see which lost pressure more quickly and whether the difference was significant.

The leakage rate varied widely between different brands of tires, so if a manufacturer recommends filling a tire with nitrogen, it’s best to heed the advice. For example, the BF Goodrich tire in the test lost 7 psi. Tire age also mattered. Presumably, older tires accumulate tiny fractures which make them more leaky with time and wear.

Water is another molecule of interest. If you only ever fill up your tires with dry air, the effects of water aren’t a problem, but not all compressors remove water vapor.

Water in tires should not lead to tire rot in modern tires because they are coated with aluminum so they will form aluminum oxide when exposed to water. The oxide layer protects the aluminum from further attack in much the same way chrome protects steel. However, if you are using tires that do not have the coating, water can attack the tire polymer and degrade it.

The more common problem (which I have noted in my Corvette, when I have used air rather than nitrogen) is that water vapor leads to pressure fluctuations with temperature. If there is water in your compressed air, it enters the tires. As the tires heat up, the water vaporizes and expands, increasing tire pressure much more significantly than what you see from the expansion of nitrogen and oxygen.

As the tire cools, pressure drops appreciably. The changes reduce tire life expectancy and affect fuel economy. Again, the magnitude of the effect likely is influenced by brand of tire, age of tire, and how much water you have in your air.

The important thing is to make sure your tires are kept inflated at the proper pressure. This is much more important than whether the tires are inflated with nitrogen or with air. However, if your tires are expensive or you drive under extreme conditions (i.e., at high speeds or with extreme temperature changes over the course of a trip), it’s worth it to use nitrogen. If you have low pressure but normally fill with nitrogen, it’s better to add compressed air than wait until you can get nitrogen, but you may see a difference in the behavior of your tire pressure.

If there is water in with the air, any problems will likely be lasting, since there’s nowhere for the water to go.

Air is fine for most tires and preferable for a vehicle you’ll take to remote locations, since compressed air is much more readily available than nitrogen.