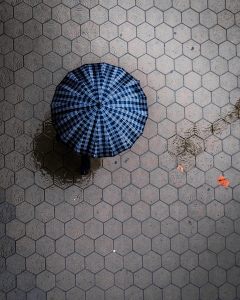 Chance of rain is the chance anywhere in the forecast region will get rain. (Craig Whitehead/unsplash.com)

You’ve seen it in weather reports: “Today there is a 60% chance of rain”.  Does this mean you have a 6 out of 10 chance of getting wet if you are outside? Will only 60% of your area definitely get rain? Will it rain 60% of the day? Just what does percent chance of rain mean to a weather forecaster?

PoP and Chance of Rain

The probability of precipitation is calculated from the product of two variables. The first variable is “confidence”. How confident is the forecaster precipitation will occur somewhere in their forecast area? This value ranges between 0 (no precipitation possible) to 1 (definitely going to rain) and comes down to the forecaster’s best guess from other data and models.

The second variable is “area affected” or A. This is the percent of the forecast area will receive the precipitation if there is any precipitation. This variable comes down to the forecaster’s best guess again based on models and other data.

Since both variables have a certain slush factor, PoP can have different meanings depending on which variable the forecaster focuses on.

Both of these examples give the same value for the chance of precipitation but have different meanings. The first example shows that 60% of the area definitely will see some measurable rain while 40% will not. The second example shows a smaller chance of rain that affects a larger area.Typically, weather forecasters will offer additional information where you can make your own decisions about possible rainfall.

Typically, weather forecasters will offer additional information where you can make your own decisions about possible rainfall. Some forecasters emphasize the chance you will see rain at some time during the forecast period. Others emphasize the area affected. If they say 60% chance of rain, 60% of their area will experience rain at some point during the forecast period. The forecaster will often mention which interpretation they adhere to.

Your best interpretation is knowing your forecaster. They tend to use the same interpretation each time and will explain further if there are other discussion points to their predictions.