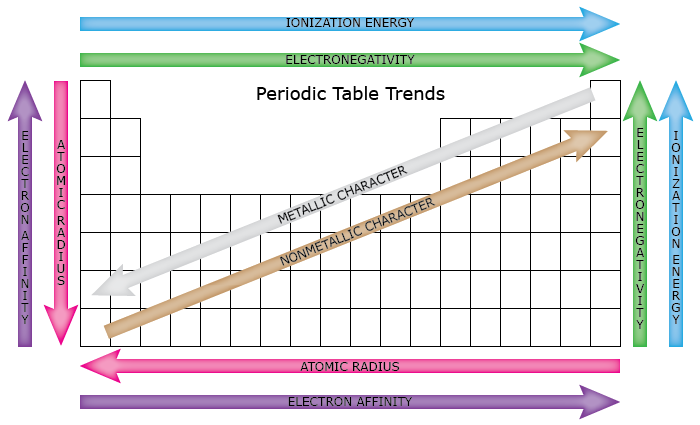 Atomic radius is half the distance between two identical atoms touching each other.

As you move across the periodic table from right to left, each element contains one more electron and one more proton. The electrons form shells and are attracted strongly to the positive charge in the nucleus, pulling the shells closer to the center and effectively making the atom smaller with the addition of each proton. As you move down the periodic table, the valence of the the atom remains the same, but there are more filled electron shells between the outer electrons and the positive nucleus. These outer shells are shielded from the positive charge of the nucleus by layers of electrons and the effective charge they experience is less than the element above them. The outer electrons are not held as tightly as the outer electrons of the elements above them on the table.

Electron Affinity is the ability of an atom to accept an electron. It is measured by the energy change in the atom as an electron is added to the gaseous form of the atom.

Atoms with stronger nuclear charge tend to have higher electron affinities as you move across the table. As you move down, the outer electron is both shielded from the nucleus by filled shells and physically further away. Both of these reduce the force of attraction between the nucleus and the added electron.

Metallic and Nonmetallic Characteristics are a group of physical properties. As you move up and across from the bottom left of the table, the elements begin to take on the characteristics of nonmetals. Moving the opposite way, the elements take on properties of metals. For a more detailed examination of the difference, check out metals, metalloids and nonmetals.