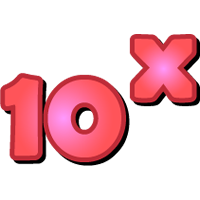 Prefixes can be used to express the ‘x’ in this number. This table will show you which metric prefix to use for different values of ‘x’. Credit: Todd Helmenstine

The same is true for the metric system or SI units. These measurements are based on powers of ten, just like scientific notation. Every three powers of ten has its own metric prefix. There are a couple of special powers of ten that have their own prefix outside the ‘every three’ pattern.

The distance between the Earth and the Moon is about 384,000,000 meters. The Mega prefix (symbol M) means one million, so you could say the distance is 384 Megameters or 384 Mm.

Substituting the metric prefix can make doing calculations easier in your head. Use the prefix that applies to your situation. This table of metric prefixes has the standard names for each prefix used in science and measurements. It also shows the symbol used to represent these prefixes, their ‘power of ten’ and the number you are actually replacing with the prefix.