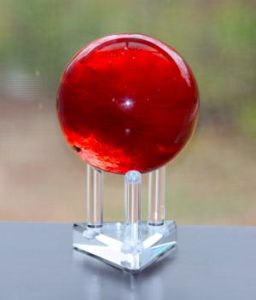 This sphere of cinnabar in quartz may be considered to be a form of red mercury. Cinnabar or vermilion is red mercury(II) sulfide.

Red mercury is the name given to an explosive form of mercury, a red-colored mercury compound, or a potential nuclear material, depending who you ask. Wm. Yerkes has written a thought-provoking response to my FAQ concerning red mercury. It’s my pleasure to share this e-mail with you:

With respect to your raising the ideas about “red mercury”, several ideas occur.

First, let us recall that in the early days of the Manhattan Project, December 1940 into January1941, and on, the Committee used code words for the “active” materials of the project, and for fission, especially fission with a “k”> 1. “k” > 1 being a self-sustaining fission chain reaction, e.g. the neutron flux increasing in a structure.

These code words were, for example “moonshine” for fission, “copper” for Pu239, “magnesium” for U235, and “tube alloy” for U238 (both in irradiated and natural states). Similarly, the various RADAR bands were assigned non-serialized designations that endure to this day. And there are numerous related examples, “Manhattan District” itself, for example.

I expect that our Russian brothers did and do the same, and it seems to me that this obfuscatory tradition probably continues with regard to “red mercury”.

I don’t think it’s a mercury derivative at all – I think the label “mercury” is a sort of metaphor, suggested by the proximity of the planet Mercury to the Sun and also, perhaps, by the association in the mind between temperature measurement and mercury. “How high is the mercury?” we say. Indeed. Very cute. “Mercury” seems to be an obscure and oblique reference to high temperatures and, therefore, perhaps, to fusion. And the name may well have been a project name, later adapted to the product itself. As to “red”, this is the color universally used to signify danger, and often to signify “heat” as well. Also apropos, if we assume the stuff exists. Assuming this, I’ll call it RM.

The story is that RM is shock-sensitive ballotechnic. I suspect that this too is related only in an obscure somewhat metaphorical way to the material. I suspect that RM is a stimulated gamma emitter. There is, as you know, online evidence of serious research on such materials. It is, possibly, hafnium 178m2 or another substance that, similarly, can be pumped to a high state and collapsed nicely with the attendant emission of high energy photon(s). I speculate that, stimulated by the input “shock” of a burst of gamma or possibly ionizing radiation from an electronic or radioactive “trigger”, the nuclei of the “pumped” RM atoms, if they exist, become extremely unstable and rapidly (<1 nano-second perhaps) collapse to a lower energy level, releasing high energy photons in the form of gamma with, presumably, an energy level >5000eV. Open sources cite gamma radiation in excess of this level. The ignition threshold for deuterium-tritium fusion (D+T) is, as I understand things, 5000 eV.

Allow me to review at bit. As you know, in conventional, classical, atomic explosives using fission processes, neutron emission builds fairly slowly, and therefore, for achievable values of k, it is necessary to design high values of containment. Prerequisite component inertia in the dynamic process of implosion together with proper neutron “reflectors”, “initiators” and “tampers” provide both a rapid rise in the value of k and this brief but essential containment in order that a satisfactory portion of the materials may fission. Incidental to this process, again as everyone knows, thermal conditions exceed the D+T threshold. It is understood that in some thermo-nuclear designs Li6, being subject to very high neutron densities, transmutes in the fission phase to T and provides an elegant dynamic.

Neutrons, even the “fast neutrons” of the process are, compared to photons, quite slow. The gadget takes a long time to detonate, several millionths of a second, as I understand it..

In a speculative RM device the photon emission burst would, presumably, occur at the speed of light in the substance. Therefore, assuming an essentially instantaneous collapse and a very small size (a sphere perhaps < 2 cm), which would limit the significance of trigger irregularities and heterogeneous dimensions as well as structural and chemical imperfections, the necessary >5000eV might be achieved. If so, upon operation the RM device would produce a burst of gamma of very short duration, followed very quickly by a broad and more persistent spectrum of gamma, etc., as the D+T fusion occurred, followed on by a lethal neutron flux, followed by secondary thermal phenomena – “blast effect”. The key to ignition lies, therefore, in a near instantaneous release of primary gamma. In order to keep the process near symmetry, rather like the need in an implosion device, the trigger shock might well need to be applied at several points. Because the trigger event lacks neutrons, an Li 6 tactic would obviously fail, and therefore both D and T would have to be present in the quiescent device, possibly associated with Be, for example as BeH2, one of the hydrogen atoms being a D and the other a T. This would seem to preclude large devices built on the presumed phenomena and suggests that RM triggered fusion devices cannot be much beyond the 1 to 2 KT range – just as the gossip says. Because T has a short half-life and is radioactive the device would be both modestly detectable and have a definite shelf-life.

More philosophically, I note that there seems to be a resonance in historical progression. Chemical explosives predate chemical engines. The two combine in the warships and cannons of the 19th century. Atomic explosives (which are chemical- nuclear) pre-date pure atomic “engines” and the two combine in the submarines of today. The natural progression has been that various recumbent combinations of technology lead first, as we have seen, to chemical-chemical, then to chemical-fission, then to chemical-fission-fusion. It is reasonable to suspect that a “loop” or “leap” to chemical-fusion will take place. Perhaps it has.

Thanks for the opportunity and invitation to speculate.