The right triangle is a special type of triangle that forms the basis for nearly all trigonometry functions. 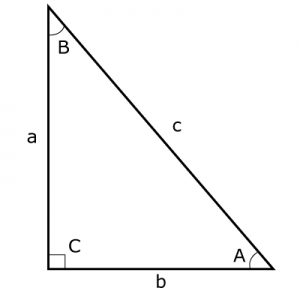 This is a right triangle. The three angles A, B and C are marked and each side’s length is denoted by a, b, and c. The side length letters are the sides opposite of the angle with the corresponding capital letter. The side opposite the right angle C is known as the hypotenuse of the right triangle.

Each triangle has six parts, 3 sides and 3 angles. If you know two of these values, you can calculate any of the other four using the six trigonometric ratios. These ratios are sine, cosine, tangent, cosecant, secant, and cotangent. Using the variables in the right triangle, the formulas for these ratios for angle A are:

The common method to remember these formulas is the mnemonic SOH CAH TOA.

T – Tangent
O – Opposite
A – Adjacent

The last three are reciprocals of the first three. The tricky part is to remember cosecant goes with sine, not cosine as the name may suggest.

Memorize and learn these relationships of a right triangle. You will see these formulas again as you further your studies in science and engineering.