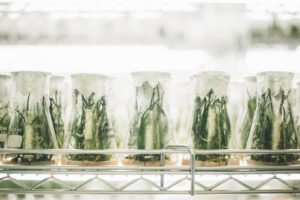 The scientific method involves a hypothesis, variables, controls, experiments, and other concepts and terms that may be confusing. This is a glossary of key scientific method vocabulary terms and their definitions.

Anomaly: An anomaly is an observation that differs from expectation or from accepted scientific views. Anomalies lead scientists to revise a hypothesis or theory.

Conclusion: The conclusion is your determination of whether the hypothesis should be accepted or rejected. It is one of the steps of the scientific method.

Control Group: The control group is the set of test subjects randomly assigned to not receive the experimental treatment. In other words, the independent variable is held constant for this group.

Control Variable: A control is any variable that does not change during an experiment. It is also known as a constant variable.

Data: (singular: datum) Data refers to any facts, numbers, or values obtained in an experiment.

Data Table: This is a T-shaped diagram used to display data from a science experiment. It includes the values of the independent and dependent variables.

Double-blind: When an experiment is double-blind, it means neither the researcher nor the subject knows whether the subject is receiving the treatment or a placebo. “Blinding” helps reduce biased results.

Empty Control Group: An empty control group is a type of control group which does not receive any treatment, including a placebo.

Error: Error is a measure of the difference between a measured or calculated value and a true value.

Extraneous Variable: Extraneous variables are extra variables (i.e., not the independent, dependent, or control variables) that may influence an experiment, but are not accounted for or measured or are beyond control. Examples may include factors you consider unimportant at the time of an experiment, such as the manufacturer of the glassware in a reaction or the color of paper used to make a paper airplane.

Fact: A fact is a statement based on evidence obtained from direct observation.

Graph: A graph is a picture that displays information. Examples of graphs include line graphs and bar graphs. The most common type of graph displays values of the independent and dependent variables.

Independent Random Assignment: Independent random assignments means randomly selecting whether a test subject will be in a treatment or control group.

Inferential Statistics: Inferential statistics means applying statistics (math) to infer characteristics of a population based on a representative sample from the population.

Internal Validity: An experiment is said to have internal validity if it can accurately determine whether the independent variable produces an effect.

Law: A scientific law is a generalization that describes what one expects to happen in a certain situation. For example, the law of gravity makes it possible to predict an object will fall if it is dropped. Laws can be used to predict behavior, but do not explain it.

Log Book: A log book or notebook records all of a scientist’s observations about an experiment. Entries are typically recorded in permanent ink.

Mean: The mean is the average calculated by adding up all the scores and then dividing by the number of scores.

Observation: An observation is information collected using one of the senses (sight, sound, touch, taste, scent).

p < 0.05: This is an indication of how often chance alone could account for the effect of the experimental treatment. A value p < 0.05 means that 5 times out of a hundred, you could expect this difference between the two groups, purely by chance. Since the chance of the effect occurring by chance is so small, the researcher may conclude the experimental treatment did indeed have an effect. Note other p or probability values are possible. The 0.05 or 5% limit simply is a common benchmark of statistical significance.

Placebo (Placebo Treatment): A placebo is a fake treatment that should have no effect, outside of the power of suggestion. Example: In drug trials, test patients may be given a pill containing the drug or a placebo, which resembles the drug (pill, injection, liquid) but doesn’t contain the active ingredient.

Placebo Effect: The placebo effect is a beneficial effect due to a subject’s belief in the power of the treatment. No active ingredient or other property of the placebo is responsible for the positive effect.

Random or Randomness: To be random means to be selected or performed without following any pattern or method. To avoid unintentional bias, researchers often use random number generators or flip coins to make selections. (learn more)

Results: The results are the explanation or interpretation of experimental data. This includes calculations made from the data.

Statistical Significance: Statistical significance is the observation, based on the application of a statistical test, that a relationship probably is not due to pure chance. The probability is stated (e.g., p< 0.05) and the results are said to be statistically significant.

Simple Experiment: A simple experiment is a basic experiment designed to assess whether there are a cause and effect relationship or test a prediction. A fundamental simple experiment may have only one test subject, compared with a controlled experiment, which has at least two groups.

T-test: The T-test is a common statistical data analysis applied to experimental data to test a hypothesis. The t-test computes the ratio between the difference between the group means and the standard error of the difference (a measure of the likelihood the group means could differ purely by chance). A rule of thumb is that the results are statistically significant if you observe a difference between the values that are three times larger than the standard error of the difference, but it’s best to look up the ratio required for significance on a t table.

Theory: A theory is a systematic explanation for phenomena, based on testing many hypotheses. Because they are evidence-based, theories are typically accepted by scientists, but they may be modified or discarded if new evidence is presented.

Type I Error (Type 1 error): A type I error occurs when you reject the null hypothesis, but it was actually true. If you perform the t-test and set p < 0.05, there is less than a 5% chance you could make a Type I error by rejecting the hypothesis based on random fluctuations in the data.

Type II Error (Type 2 error): A type II error occurs when you accept the null hypothesis, but it was actually false. The experimental conditions had an effect, but the researcher failed to find it statistically significant.