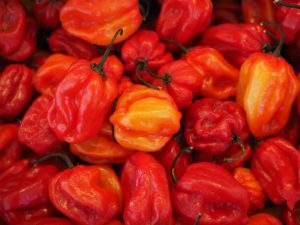 The Scoville scale is a way to measure how hot a spicy food is. The Carolina Reaper is the hot pepper with the highest Scoville rating.

The Scoville scale is used to compare the relative heat of foods, such as ginger, black pepper, and hot peppers. Chemical heat is reported using Scoville heat units (SHU). The scale is named for Wilbur Scoville, the pharmacist who devised the organoleptic test for heat in 1912. This is a table showing the Scoville ratings of various chemicals.

Problems With the Scoville Scale

Scoville’s original scale is a subjective test. Testers are given a sample containing a known weight of dried pepper dissolved in alcohol and diluted in sugar water, then asked to assess its heat. Testers sample increasingly dilute solutions until no heat is felt. Although a panel of five tasters is used, the accuracy of the test depends on each individual’s ability to taste heat (number of receptors) and how easily they become desensitized to the sensation. Thus, a typical Scoville test result may vary as much as 50 percent from one lab to another.

Another source of error comes from the sample. The growing conditions (especially humidity) and soil composition greatly affect pepper heat. Given seeds of identical lineage, one grower’s pepper may be much hotter than another’s.

While the Scoville organoleptic test is the classic means of measuring pungency, it isn’t precise. Modern chemists use high-performance liquid chromatography (HPLC) to assess heat. HPLC is used to identify the molecules responsible for pungency. A mathematical weighting system compares the quantity of molecules, their relative heat-producing capacity, and their concentration to produce “pungency units.” The American Spice Trade Association multiplies pungency times 15 to obtain a “Scoville score.” A Scoville score unit is one part capsaicin per million parts dry pepper mass.