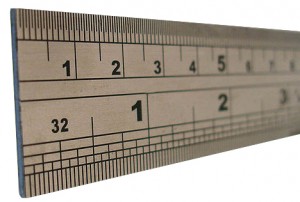 All measurements have a degree of uncertainty. This ruler has several different levels of precision. Accuracy and precision depend on both the measuring tool and the person doing the measuring. Credit: Public Domain/Gowolves09

Significant figures are an expression of the uncertainty of a number. All measurements have some degree of uncertainty in their value. This can be caused by the skill of the measurement taker or the tool used.

For example, if you are in a chemistry lab and you need to add 8 mL of liquid to a beaker. You could just pour water straight into the beaker and quit when you think you hit 8 mL. The error associated with this measurement would mostly be associated to your skill. You could use a beaker with markings every 5 mL and get pretty close, give or take a couple mL. You could use a graduated cylinder with markings every tenth of a mL and reliably get measurements between 7.9 and 8.1 mL. Here we see how the uncertainty can be affected by the measuring tool.

Quick Tip to Calculate Significant Figures
Write the number in scientific notation. The numbers ahead of the multiplier are all significant.

Significant Figures and Uncertainty in Calculations

Significant figures can be ‘lost’ in a calculation. For example, if you have a beaker that weighs 75.206 grams and you add water until the weight is 75.844. The water would weigh the difference between these two values.
75.844 g – 75.206 g = 0.638 g
The final result only has 3 significant figures when both measurements had 5 significant figures.

Occasionally, a calculation involves a number with an exact value rather than an approximation. This occurs in calculations using conversion factors, pure numbers or physical constants. The significant figures of these numbers do not affect the end result. For example, if you were to find the average of 10.3 cm, 12.7 cm and 14.5 cm, you would add the three numbers together to get 37.5 cm. You would then divide this by 3 to get the average or 12.5 cm. Even though 3 only has one significant figure, your answer is still 12.5 cm.

The use and rules of significant figures in science and engineering is standard in any field. Measuring is a basic skill in science and everyone needs to work under the same rules. It is best to learn them early and keep them in mind in all your work.

More about Measurements:
What is the Difference Between Accuracy and Precision?