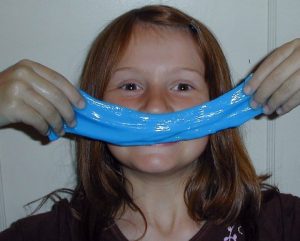 The most popular of the slime recipes is the one using borax and glue.

Slime is a classic science project. There are lots of different ways to make it, so you’re sure to have ingredients to make it. Here’s a collection of easy slime recipes to try: 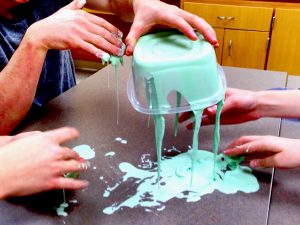 Oobleck is a type of slime that behaves as a viscoelastic or non-Newtonian fluid. (David Mulder)

Goo or oobleck is a non-sticky opaque slime that is an example of a non-Newtonian fluid. This means it acts differently according to external conditions. This slime flows like a liquid, but if you squeeze it hard or punch it, it feels solid. All versions of this slime are non-toxic and safe even for very young children. There are actually a few different ways to make goo or oobleck. The simplest is to mix together corn starch and water or corn starch and vegetable oil. If you have the materials, using liquid starch instead of powdered corn starch and white glue instead of water or oil makes a nice slime:

Glow in the Dark Slime Recipes 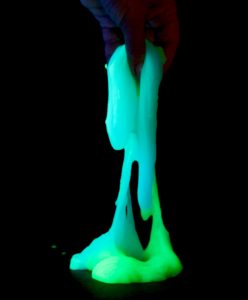 You can turn any slime into glow in the dark slime by adding a phosphorescent powder or by replacing glue in a recipe with glow in the dark glue. Make slime that glows under a black light by adding highlighter ink instead of food coloring.

Note: Most phosphorescent powders are destroyed by contact with water! Your best bet is to use a powder made for mixing into acrylic (water-based) paint or a pre-mixed liquid solution, like a paint or a glue.

Here’s the recipe for the slime I made for this photo: