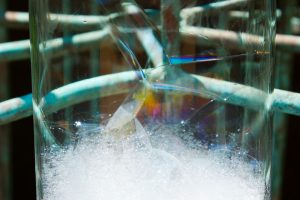 Soap in a tube? Why not! Typically when people make soap, they make a lot of it. However, you can make a small amount of soap in a test tube as a chemistry demonstration. This is a terrific example of the saponification reaction, plus it results in a product you can use.

Make Soap in a Tube

One of the organic chemical reactions known to ancient man was the preparation of soaps through a reaction called saponification. Natural soaps are sodium or potassium salts of fatty acids, originally made by boiling lard or other animal fat together with lye or potash (potassium hydroxide). Hydrolysis of the fats and oils occurs, yielding glycerol and crude soap.

In the industrial manufacture of soap, tallow (fat from animals such as cattle and sheep) or vegetable fat is heated with sodium hydroxide. Once the saponification reaction is complete, sodium chloride is added to precipitate the soap. The water layer is drawn off the top of the mixture and the glycerol is recovered using vacuum distillation.

The crude soap obtained from the saponification reaction contains sodium chloride, sodium hydroxide, and glycerol. These impurities are removed by boiling the crude soap curds in water and re-precipitating the soap with salt. After the purification process is repeated several times, the soap may be used as an inexpensive industrial cleanser. Sand or pumice may be added to produce a scouring soap. Other treatments may result in laundry, cosmetic, liquid, and other soaps.