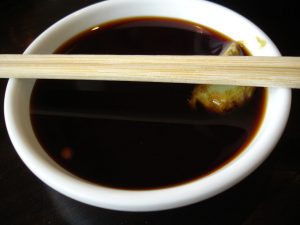 The news services sometimes include unusual stories that relate to chemistry. For example, Snopes collected a series of news reports about the use of potentially carcinogenic soy sauce made using human hair instead of soy beans. I learned that the amino acids in human hair can be used to make a condiment with a flavor similar to that of the usual soy variety. Making soy sauce with hair apparently has been in practice since World War II. The cancer-causing chemicals don’t derive from the human hair, but rather from the chemicals used to process hair to make it into food.  I had been craving Chinese food, but I may go for pizza instead now. Ick.

Also, you might want to check the ingredient list on your soy sauce. Even though it’s unlikely your sauce contains hair, most soy sauce in those little packets from Chinese take-out restaurants is not really made using soybeans. An example list of ingredients is: corn syrup, water, salt, caramel color, vegetable protein, and sodium benzoate. The vegetable protein may or may not include soy. It’s common for a grain to be included, such as wheat. The soyless soy sauce tends to be used more for Chinese food than Japanese food.