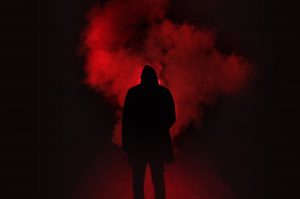 Every now and then, there’s a news story about a mysterious death where the victim has burned, seemingly without being set on fire or in proximity to a heat source. In other cases, a fresh corpse began to burn, without external assistance. If forensics rules out obvious causes, like passing out with a bottle of vodka in one hand and a lit cigarette in the other or sleeping in nylon pajamas while using a radiator as a pillow, then spontaneous human combustion or SHC might be the tentative conclusion.

What You Need for Spontaneous Combustion

Combustion is an oxidation reaction. Basically, a fuel and an oxidizer react to produce energy, usually as heat or light. Your body performs oxidation reactions all the time. The food you eat becomes fuel for your cells, generating heat and infrared light. However, food doesn’t spontaneous burst into flames in your stomach. Why? Because a chemical reaction won’t occur unless its activation energy is met. This is the minimum amount of energy needed for a set of reactants to turn into a set of products. Spontaneous processes have all the energy they need to occur and may release more energy, keeping the reaction going. A truly spontaneous reaction occurs without any sort of initiating energy or event, but some reactions appear spontaneous to observers because the source of the activation energy is invisible. For example, sunlight or slight heat sometimes provides sufficient energy for combustion. Consider a container of gasoline. Nothing may happen until the gas gets hot or a spark is lit near the vapor. Under the right conditions, spontaneous combustion occurs. However, most combustion reactions are activated by some event. Keep this in mind when considering the possibility of spontaneous human combustion.

You may have heard that if you pour on enough lighter fluid, you can make anything burn. That is not far from the truth! Clearly, human beings can burn. Cremation of human remains presents no problems. Other animals burn, too. You may have left a hamburger on the grill and watched the fat ignite, illustrating the potential for combustion.

You might argue people don’t just catch on fire because the average person is 60-70% water. While hydration limits the likelihood of combustion, it doesn’t prevent it. Alcohol-based hand sanitizer contains a comparable amount of water, but burns just fine. So does rubbing alcohol. While humans tend not to contain high levels of alcohol, we do have fat, skin, and hair, which can serve as fuel for combustion. Other flammable chemicals that may be present include alcohol (from drinking) and acetone (from low carbohydrate dieting or a medical condition).

Researchers who study SHC have managed to burn pig carcasses, without dousing them in gas or roasting them over an open flame. The pigs burned through a process called ‘wicking’, where the clothes, skin and other tissue act as a sort of wick for subcutaneous fat, essentially turning the carcass into a pork candle. Humans and pigs share comparable physiology, so it makes sense the same process could occur with people. Even lean humans carry sufficient fat to sustain combustion. However, in the experiments with pigs, a heat source was required to start the process. While you aren’t going to burst into flame if a stray spark lands on your hand or you touch a lit cigarette directly to your skin, your hair or clothes could ignite, which could start the process.

So, if people can burn, maybe the real question should be: Why don’t we combust more often? The answer is simple. If you catch fire, you put it out. Nearly all cases of spontaneous human combustion involve people with limited mobility. Either they are dead, asleep, unable to move, or passed out from drinking. In many cases, the victim was under the influence of alcohol. In nearly all cases, the victim was alone.

In most reports of spontaneous human combustion, the torso burns, while the extremities may be relatively untouched. A few rare instances involved survivors who stopped burning or else emanated smoke, but no flames.

So, Is Spontaneous Human Combustion Possible?

From a scientific standpoint, until it’s proven impossible, spontaneous human combustion is possible. However, the ‘spontaneous’ part is extremely unlikely. While mechanisms have been proposed and tested that explain sustained burning of a body, to date, no one has proposed a mechanism for a body igniting on its own. That doesn’t mean it can’t happen. It just means if it happens, no explanation presently exists.

Set Yourself on Fire WITHOUT Burning