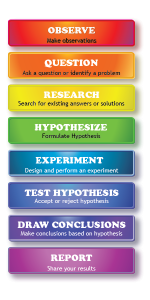 The scientific method is a system scientists and other people use to ask and answer questions about the natural world. In a nutshell, the scientific method works by making observations, asking a question or identifying a problem, and then designing and analyzing an experiment to test a prediction of what you expect will happen. It’s a powerful analytical tool because once you draw conclusions, you may be able to answer a question and make predictions about future events.

These are the steps of the scientific method:

Sometimes this step is omitted in the list, but you always make observations before asking a question, whether you recognize it or not. You always have some background information about a topic. However, it’s a good idea to be systematic about your observations and to record them in a lab book or another way. Often, these initial observations can help you identify a question. Later on, this information may help you decide on another area of investigation of a topic.

There are various forms of this step. Sometimes you may want to state an objective and a problem and then phrase it in the form of a question. The reason it’s good to state a question is because it’s easiest to design an experiment to answer a question. A question helps you form a hypothesis, which focuses your study.

You should conduct background research on your topic to learn as much as you can about it. This can occur both before and after you state an objective and form a hypothesis. In fact, you may find yourself researching the topic throughout the entire process.

It’s a good idea to record notes alongside your data, stating anything unusual or unexpected. Once you have the data, draw a chart, table, or graph to present your results. Next, analyze the results to understand what it all means.

Do the results support the hypothesis or not? Keep in mind, it’s okay if the hypothesis is not supported, especially if you are testing a null hypothesis. Sometimes excluding an explanation answers your question! There is no “right” or “wrong” here. However, if you obtain an unexpected result, you might want to perform another experiment.

What good is knowing something if you keep it to yourself? You should report the outcome of the experiment, even if it’s just in a notebook. What did you learn from the experiment?

How Many Steps Are There?

You may be asked to list the 5 steps of the scientific method or the 6 steps of the method or some other number. There are different ways of grouping together the steps outlined here, so it’s a good idea to learn the way an instructor wants you to list the steps. No matter how many steps there are, the order is always the same.

3 thoughts on “Steps of the Scientific Method”