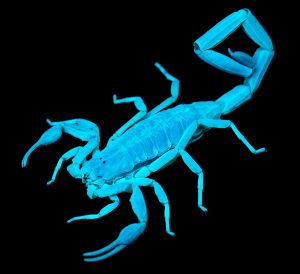 Have you ever noticed a lot of common stuff glows under black light or ultraviolet light. What things have you seen glow in the dark? Offer your idea or read about glowing materials observed by other readers.

Ground up Vitamin B Tablets Glow Under Black Light

When one ground up pill is added to water, it glows a sickly yellow-green. Really cool
—Gregory

the popular Cup Noodles definitely glows under black light. The residue on the sides of the styrafoam glows, and if you pour the broth into a shallow bowl that will glow too. Yuck
—Angela

Pour yourself a tall glass of milk and break out the black light. Milk glows brightly, with a sickly yellow tinge… looking a bit like eggnog. Modern US paper currency has dye in the security strips that glows (excluding $1 & $2 bills). 5 dollar bills seem to “bleed” their UV dye moreso than the rest.
—Marb

I put a bit in clear bottles and filled them the rest of the way with water.
—someone

Most state DL’s and ID’s

Many states in the USA provide hidden images or words in their driver’s license and ID’s for authenticity when checked at bars or clubs. Many major credit cards will also have hidden images or letters, too.
—Rudy

How can you forget drugs?

Cocaine glows under a black light. That is how they can quickly tell it from sugar and baking powder!
—AJ Honeylake

Highlighters, especially yellow ones, glow under black light. This can be especially fun for body art, because the yellow highlighter often doesn’t show up on skin in regular lighting– only under the black light.
— Sam

Ok so like you can see scorpions under black light and if you use a black light on beads,shirts , fabric glue,& sparkling water. all glow in black light like this one time i had a party and we mixed sparkling water and beer/ punch and we put black lights up and strobe lights and trough a high lighter party and live everything glew in the dark it was one of the best night of my life!!!!!!!!!!!!!
— Candy girl and friend 🙂

i learned that Disinfectant spray can be seen under a Blacklight right after you have sprayed it into the air.
— ryan

I bought a small led black light from the pet store.I can use it to draw words on my tv screen in the dark … The screen remains lit where I exposed it to the light for nearly a minute.
— Caren

A lot of people’s teeth glow under black light. I bet it’s because of whitening toothpaste, unless it’s the fluoride compound that glows!
—Glow Girl

5 thoughts on “Stuff That Glows Under Black Light”