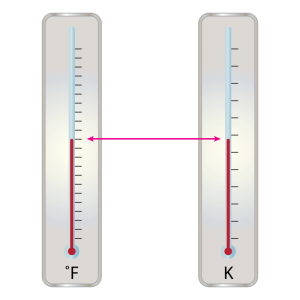 At what temperature does both Fahrenheit and Kelvin thermometers read the same value?

The Kelvin temperature scale, also known as the absolute temperature scale, is the SI unit of measuring temperature. The scale starts at absolute zero, where molecular energy is at its minimum value and rises from that where each unit is equivalent in size to the Celsius degree. The difference between Celsius and Kelvin is expressed by the formula:

If we solve this for °C, we get

where °F and °C are the temperatures in Fahrenheit and Celsius respectively.

Since these two equations equal the same thing (°C), they equal each other.

Now you have the formula to convert between Kelvin and Fahrenheit. We want to know when K = °F, so plug in K for °F in the formula.

Solve for K. First, get rid of the parenthesis

Subtract 5⁄9 K from both sides

Multiply both sides by 9⁄4

Solving this problem wasn’t that difficult. It just required a little basic algebra and knowing a way to convert Kelvin to Fahrenheit.