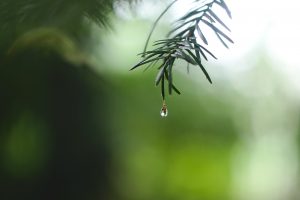 Water forms a teardrop shape just before it falls from an object. (Ed Leszczynskl)

If asked to draw a raindrop, just about everyone draws a teardrop shape. When water drips from a surface, like the tip of a leaf, this is the shape it makes just before the drop falls. But, once the drop is released, it forms a sphere. Raindrops form spheres, too, plus they assume other shapes. The biggest factor in raindrop shape is their size.

Depending on their size, raindrops range in shape from tiny spheres to hamburger bun shapes to jelly beans to umbrellas.

Within clouds or very humid air, water vapor condenses into liquid water. When the drops are very tiny, the surface tension and cohesive force of the water molecules forms spheres that aren’t readily distorted by wind or gravity.

Raindrops grow as more water vapor condenses and by merging with other droplets. As the droplets gain mass, gravity draws them downward. The larger a droplet is, the faster it falls. The top and bottom of the drop experience pressure differences. Air pushing past the falling drop exerts pressure on its base, flattening it out and increasing its diameter. There is less pressure on the top of the drop, so it stays round.

When a raindrop is large enough to achieve terminal velocity, it starts to split into two drops. A depression forms in the bottom center of the droplet. Raindrops about 3 mm in diameter resemble jellybeans or deformed hamburger buns.

A massive raindrop resembles an umbrella, parachute, or jellyfish. As the droplets split, the central depression becomes a thin skin of water molecules. The bottom rim of the droplet is thicker. Any additional pressure, like from a wind gust, tears the fragile shape apart. One raindrop becomes two drops.

At one time, scientists thought the maximum size of a raindrop was about 4 millimeters. However, researchers have made and levitated 10 mm drops in a wind tunnel. These drops had the distorted umbrella shape and a volume equal to that a 4.5 mm sphere.

How We Know Raindrop Shape

The human eye typically forms 10 to 12 images per second, so falling rain appears more as lines than drops. So, scientists use high-speed photography to image raindrops. Meteorologists use ground radar and satellites to view raindrop sizes and predict precipitation.

NASA explains the water cycle, then takes a closer look at raindrop shapes and the instruments scientists use to view them: