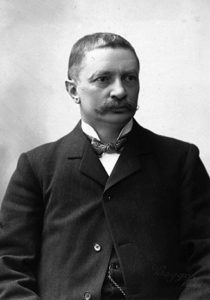 December 28 marks the passing of Johannes Rydberg. Rydberg was a Swedish physicist who discovered an empirical mathematical formula to predict the wavelengths of light emitted by hydrogen atoms.

He noticed the wavenumbers, or inverse of wavelength, of the spectral lines, were proportional to a difference of integer values. He felt this was important in explaining the periodic nature of elements and continued working to find other mathematical patterns and relationships to the elements.

His empirical formula would later become important in the development of the Bohr model of the atom and the introduction and development of quantum mechanics. Rydberg’s integer values would be related to the principal quantum number or energy levels of an atom. The proportionality constant of Rydberg’s equation became one of physic’s fundamental constants known as the Rydberg constant.

Mullis is an American biochemist who shares the 1993 Nobel Prize in Chemistry with Michael Smith for their developments of techniques in DNA based chemistry. Mullis developed the polymerase chain reaction (PCR) method to quickly make a huge number of copies of specific pieces of DNA. This technique is extremely useful to extend sample size for many genetic applications.

Schmidt is a Dutch-American astronomer who discovered the first quasar. Quasars or quasi-stellar radio sources are active and very distant galaxies. They have a very large red-shift to their spectra suggesting these objects are extremely far away from our galaxy. Quasars are also believed to be large galaxies containing a supermassive black hole in their centers to drive the electromagnetic energy being emitted.

Rossby was a Swedish-American meteorologist who explained the large-scale atmospheric motions in terms of fluid mechanics. He used this to identify the jet stream and a phenomenon he called Rossby waves. Rossby waves are currents of air set in motion due to the Coriolis forces and pressure gradients caused by the rotation of the Earth. This wave motion was eventually found in the currents of the ocean as well as the atmosphere.

Rossby also established the first weather service for civil aviation and headed a project to model air motion and forecast the weather using an electronic computer. 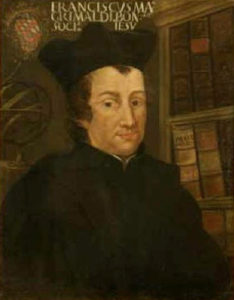 Grimaldi was an Italian Jesuit scholar who was the first to note light will spread out when shined through a thin slit and named this effect diffraction. He also investigated the behavior of items in free fall with Giovanni Riccioli and found the distance the falling object fell was proportional to the square of the time it took to fall.