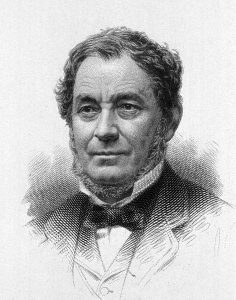 August 16 marks the passing of Robert Bunsen. Bunsen was a German chemist who, together with Gustav Kirchhoff, developed the study of emission spectroscopy.

Bunsen’s early work dealt with the chemistry of cacodyl compounds. Cacodyl has a general structure of (CH3)2As-As(CH3)2. It smells of garlic and is extremely poisonous. It also spontaneously combusts in air. An explosion caused by this chemical caused Bunsen to lose his sight in his right eye and almost die of arsenic poisoning. In spite of his unfortunate encounter, he did manage to discover ion oxide hydrate is an effective antidote to arsenic poisoning. He also postulated the existence of the methyl radical (-CH3).

His next project involved the use of electrolysis to produce pure samples of several metals. He obtained pure samples of aluminum, barium, calcium, chromium, lithium, magnesium, manganese and lithium using this technique. Together with Henry Roscoe, he studied the formation of hydrogen chloride from hydrogen and chlorine. They discovered the reciprocity law which the intensity of light has an inverse relationship with the duration of light to determine the rate of a light sensitive reaction.

He left this line of investigation to begin his partnership with Kirchhoff. Heated elements give off a spectrum of visible light with distinct bands of bright colored lines when viewed through a thin slit. Bunsen and Kirchhoff developed a device to collect this light and divert this light through a prism. They measured the angle the bright bands were bent using a pivoting telescope. This measurement would allow them to calculate the wavelength associated with the bright line. The two men noticed every element had their own distinct spectra. The two men began a systematic study of the emission spectra of many different samples. During this investigation, Bunsen detected the existence of two unknown elements. After isolating them, he named them caesium, for its distinctive blue spectra and rubidium for its red spectra. Their technique also identified helium in the sun.

One thing all chemistry students know about is the famous Bunsen burner. Bunsen’s spectroscopy studies required an adjustable flame that burned hot and clean. Bunsen got the idea to premix the combustible fuel with air before it arrived to be burned. He assigned the final engineering of the device to his assistant Peter Desaga. Several versions were built before designing the model still in use today in laboratories around the world.

As a teacher, Bunsen attracted several notable students. Among them was Dmitri Mendeleev, the man who designed the Periodic Table. Three of his other students would go on to be Nobel Prize winners. These were Adolf von Baeyer (1905), Fritz Haber (1918), and Philipp Lenard (1905 Physics). Many others would go on to become leaders in Chemistry.

Other Notable Science Events for August 16 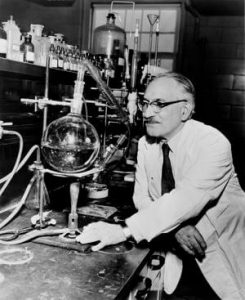 Waksman was a Russian-American biochemist who was awarded the 1952 Nobel Prize in Medicine for the discovery of streptomycin. Streptomycin is an effective antibiotic against tuberculosis. He also coined the term antibiotic and was involved with the discovery of many other antibiotics such as neomycin, clavacin, antinomycin, and candidin. 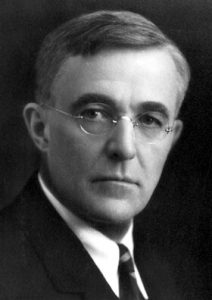 Langmuir was an American chemist who was awarded the 1932 Nobel Prize in Chemistry with Dr. Katherine B. Blodgett. He was the first non-academic chemist to be awarded the prize. The work was primarily about monolayers and surface absorption and created an entirely new discipline of thin film chemistry.

He also contributed to atomic theory by proposing that atoms try to complete their outer shells with eight electrons (the octet rule). 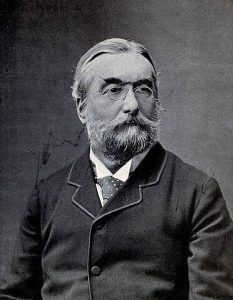 Lockyear was an English astronomer who is credited with the discovery of the element helium. He discovered it while taking spectroscopic measurements of the sun. 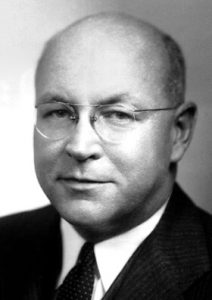 Stanley was an American biochemist who shares half the 1946 Nobel Prize in Chemistry with John Howard Northrop for their production of pure samples of enzymes and virus proteins. He isolated the nucleoprotein that activates the tobacco mosaic virus. 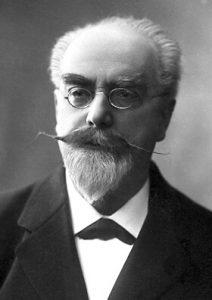 Lippmann was a Luxembourgish physicist who created the first color photographic plate. The Lippmann plate used a glass plate coated with a silver emulsion on one side. The other side is exposed to light while the emulsion side is backed by a reflective material such as mercury. The light is reflected back and interferes with the incoming light creating a Bragg diffraction pattern. After the plate is processed, the patterns can be viewed by the reflection of a diffuse light source in color. Lippman was awarded the 1908 Nobel Prize in Physics for this process.