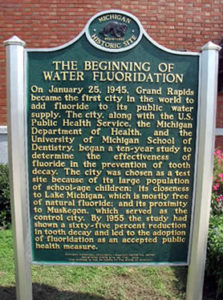 The US National Institutes of Health began a study to test the relationship of fluoride and tooth decay and public health. They added fluoride to the water supply in Grand Rapids, Michigan beginning in 1945. Their results were published in 1950 showing after the addition of 1 mg/L concentration of fluoride there was a significant reduction in the number of cavities. This was enough for them to recommend adding fluoride to municipal water supplies. Fluoridation became the accepted policy of the US Public Health service in 1951. Today, about two-thirds of the US population is receiving fluoridated water.

This policy has continuously caused controversy, mainly because fluoride is a known toxic substance. Excessive exposure causes dental fluorosis which darkens and weakens tooth enamel, the exact opposite of its intended purpose. Opponents propose changes in personal dental care in the past sixty years have had more of an impact on cavity reduction than any fluoride added to the water.

The Centers for Disease Control list fluoridation as one of the 10 great public health achievements of the 20th Century. The American Dental Association, American Academy of Pediatrics, US Public Health Service, and World Health Organization all endorse water fluoridation. On the other end of the spectrum, Europeans do not fluoridate their water and have also seen a decline in cavities. Several scientists at the Environmental Protection Agency believe fluoridation poses an unreasonable risk. Several communities in the United States have voted to stop adding fluoride to their water supply.

Carlsson is a Swedish chemist and pharmacologist who investigated the neurotransmitter dopamine and its effects on people suffering from Parkinson’s disease. He found a way to measure dopamine levels in brain tissue. He also found the levels in the area of the brain controlling movement were higher than other areas of the brain. When he gave the animals a drug to lower dopamine levels, they showed motion control loss similar to the symptoms of Parkinson’s. He could return function to the animals by injecting the dopamine precursor L-dopa. The same treatment helps people alleviate the symptoms of Parkinson’s. This discovery earned him a third of the 2000 Nobel Prize in Medicine. 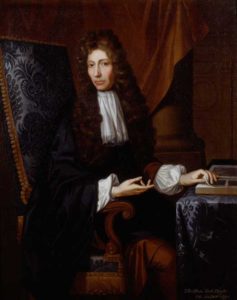 Boyle was an Irish chemist who made a significant contribution away from the alchemical idea of Aristotle’s four elements to the atomic model of elements. He argued elements consisted of ‘corpuscles’ (atoms) instead of the four traditional elements of earth, air, fire, and water. He also proposed nature could be broken down and described as a set of simple mathematical laws. He outlined his arguments in the form of a narrative of a group discussion in his book The Sceptical Chymist.

He also worked extensively with gases, especially with low pressure or ‘rarefied airs’ and vacuums. He demonstrated that vacuum can exist in nature, sound cannot travel through it, and animals cannot live without air. These experiments led to Boyle’s ideal gas law where a gas at constant temperature will have changes in pressure inversely proportional to changes in the volume containing the gas.

One thought on “Today in Science History – January 25 – Water Fluoridation”