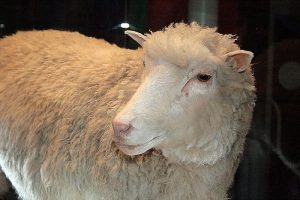 July 5 is the birthday of the first cloned mammal, Dolly the Sheep.

Dolly was born on July 5, 1996. She was the first mammal to be successfully cloned from an adult cell using the nuclear transfer method. The clone was created by Ian Wilmut, Keith Campbell and others at the Roslin Institute in Scotland. Dolly was the first success after 277 other attempts. She was born to three different mothers. One who supplied the genetic material, another who supplied the egg cell and the last to carry the embryo.

The nuclear transfer method of cloning is done by removing the nucleus of an unfertilized egg cell, removing the DNA. The nucleus of a different cell from the animal you are trying to clone is then injected in the egg cell. The cell is then stimulated to hopefully begin to divide. If successful, the cell is implanted in the uterus of the animal to carry to term. It is a difficult procedure and often ends in failure.

Dolly’s birth was announced to the world the following February. She had a large media following including a special report in TIME magazine and Science listing her as the breakthrough of the year. She would go on to have six children of her own before being euthanized in 2003 for progressive lung disease and severe arthritis. Post mortem showed Dolly suffered from a common form of sheep lung cancer.

Dolly’s initial name was 6LLS. Since she was the first, they felt she needed a proper name. Dolly’s genetic material was removed from a mammary gland, so they felt she should be named after someone known by their mammary glands: Dolly Parton.