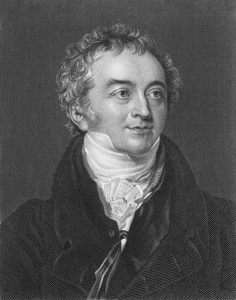 June 13 is the birthday of Thomas Young. Thomas Young was an English polymath who demonstrated light behaved as if it was a wave.

He performed an experiment where he covered a window with paper allowing only a pinhole of light to pass through into the darkened room. This ray of light was then split with a thin card. He noticed that a pattern formed on the opposite wall similar to the pattern of interfering water waves. The light from one side of the card interfered with light from the other side, just like waves. Young used this technique to determine the wavelengths of different colored light very close to modern accepted values. In 1803, he presented his findings to the Royal Society.

He was unprepared for the reception. The prevailing theory of the nature of light was Isaac Newton’s ‘corpuscular theory’ where light was some steady stream of particles. Everyone knew sound was a wave. You can hear sounds after they travel around corners or through bent pipes or hoses–something you can’t do with light. Even though corpuscular theory could not explain why light would be both refracted and reflected when it hit the surface of water, it was the accepted explanation of light. In the Royal Society, you did not disagree with Isaac Newton. Young encountered critics, who for no other reason than that, ignored the evidence presented before them. He was disappointed enough to change his principal focus of study to medicine.

Young is also known for Young’s modulus. Engineers and materials scientists will know this as the measure of a material’s “stiffness”. It is expressed as a ratio of the stress along an axis with the strain along the same axis within the range of where the material is not permanently deformed by these forces.

Another field he had great influence on was physiological optics, or the study of vision. He explained how the eye’s crystalline lens changes its curvature to alter the focal length for near or far vision. He was the first to describe astigmatism and theorized the role of three different types of nerves at the retina in color vision.