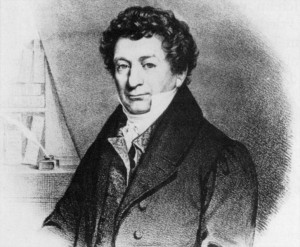 June 19 is Friedrich Wilhelm Adam Sertürner’s birthday. Sertürner was a German pharmacist and largely responsible for taking pharmacology from alchemy to chemistry.

In 1804, Sertürner was an apprentice to a pharmacist where he worked with opium. Opium is a narcotic derived from the sap harvested from opium poppy seed pods. It has was widely used as a pain reliever. In its alcoholic solution form, laudanum, was used to induce sleep. Sertürner set himself to find the active ingredient in opium that causes these effects.

He eventually crystallized a substance from opium that fit the description. He named his new substance ‘morphine’ after the Greek god of sleep, Morpheus. When he announced his discovery, it was largely ignored. He decided to prove his discovery through public demonstrations of his morphine substance on himself and three of his friends. Today, he is acknowledged as the first to extract an alkaloid from a plant.

Morphine would quickly replace opium and laudanum in medical practices around the world. It would be widely used to treat anyone suffering from acute or chronic pains. In many cases, it was offered as a substitute for people suffering from addiction to alcohol and opium. That is, until doctors discovered morphine was even more addictive itself than either alcohol or opium. Today morphine is a controlled substance and not available for general use.

Sertürner would begin distributing morphine from his apothecary shop in 1817. In 1827, a small chemist shop in Darmstadt, Germany called Merck began to sell morphine commercially. Today, Merck is one of the largest pharmaceutical companies in the world. Sertürner’s success would lead others to discover medically important alkaloids such as quinine, caffeine and strychnine. His work pioneered the field of alkaloid chemistry.