June 28 is Emil Erlenmeyer’s birthday. Erlenmeyer was a German chemist best known for the flask that bears his name.

An erlenmeyer flask is a piece of laboratory glassware consisting of a conical based flask with cylindrical neck. This design allows the chemist to do much of the same work as a beaker, but the wider base allows for better swirling or stirring of the contents. The narrow neck prevents the contents from sloshing out during swirling. It also allows the use of a stopper, something much more difficult with a beaker. It has become one of the most recognizable pieces of chemistry laboratory glassware. Erlenmeyer published the invention of his flask in 1860, but had demonstrated it at a conference three years prior. 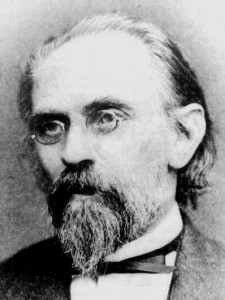 Erlenmeyer was originally an pharmaceutical chemist with his own apothecary business. He grew tired of the work and decided to return to chemistry. After receiving his doctorate, he moved to Heidelberg. While there he met August Kekulè, the chemist responsible for the idea of carbon being tetravalent and that carbon could bond to other carbon atoms to form chains. Erlenmeyer quickly adopted the theories of Kekulè and postulated carbon could also link together through double and triple bonds.

Erlenmeyer is also known for Erlenmeyer’s Rule. Erlenmeyer’s rule says an aldehyde or ketone will form when an alcohol’s hydroxyl group is attached directly to a carbon double bond. In most modern texts, this is known in general as keto-enol tautormerism.

Erlenmeyer was one of the greats of the early days of German organic chemistry. Happy birthday!