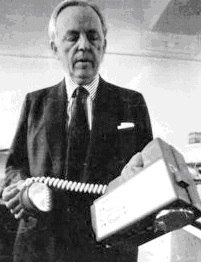 By 1965, cardiac disease had become one of the most common causes of death and considered by many health care professionals to be an epidemic. A great many of these deaths were due to ventricular fibrillation where the heart’s pattern of contractions fall out of sync. This causes the heart to stop acting as a pump it is supposed to be.

Normally, this could be treated with a defibrillator at the hospital. This device delivers a strong electrical shock across the heart to reset the heart to its natural rhythm. If done quickly after the onset of a heart attack, a defibrillator could save the life of the patient. This device was installed in many hospitals around the world. The problem was, most heart attacks occur outside of hospitals.

Dr. Pantridge recognized the need for a version of the large hospital sized defibrillator that ran on wall current that could be taken to the patient. He designed a device that did the job using an inverter and a car battery. The inverter would convert the battery’s 12 volts to the 230 volts needed to power the defibrillator. His first unit weighed in at 70 kilograms and was installed in a Belfast ambulance. Within three years, his design was reduced to a more modest 3 kilograms.

In Belfast, coronary patients were suddenly living long enough to get treatment. Pantridge’s defibrillator was quickly adopted in the United States and its success earned him the title “Father of Emergency Medicine”. In the United Kingdom, however, it would take another ten years before the device was formally adopted for general use. Today, defibrillators are everywhere and easy enough for novices to use. Most come with a safety device that will not deliver a shock unless fibrillation is detected. 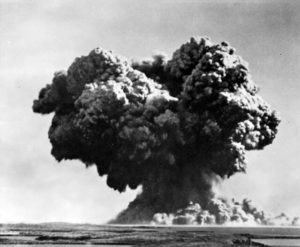 The British detonated their first atomic device as part of Operation Hurricane. The 25 kiloton plutonium device was detonated aboard the HMS Plym frigate off the coast of Western Australia. The United Kingdom became the third country to develop atomic weapons.

The British government had their own atomic bomb project during World War II known by the codename Tube Alloys. They merged their project with the United States’ Manhatten Project to work towards their common goal. This relationship ended at the end of the war. The British government continued their own program called High Explosive Research in 1947. Operation Hurricane was the first of their successful tests.