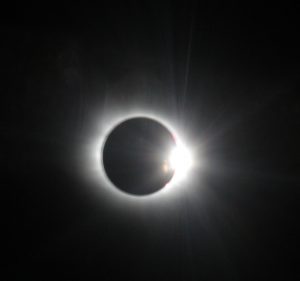 Viewing a total solar eclipse from an airplane is a bit different from viewing one from the ground! On the one hand, you can get above the clouds, so it’s practically a given that you’ll have a clear sky. Also, the speed of the jet increases the duration of totality, sometimes by a long time. On the other hand, it’s incredibly complicated and requires a lot of planning. Also, it probably doesn’t work well unless the sun is low enough in the sky to view the eclipse out a window. Conditions were perfect for viewing the total solar eclipse on March 20, 2015 over the North Atlantic.

My group set out to view the total solar eclipse from Reykjavik, Iceland from 3 Icelandair Boeing 757 jets. These jets had been sitting on the ground awaiting our arrival for a couple of weeks, with perfectly clear windows and everything else we could need or want. We headed south to get into position over the ocean, then turned to follow the path of the eclipse before returning to land. Here’s a fun fact for you. Each of the Icelandair jets has a name, after one of the country’s famous volcanoes. These aircraft are very cool, featuring interior aurora lighting. The crew turned off the aurora display for this flight to aid our viewing, but it’s wonderful if you’re flying at night. 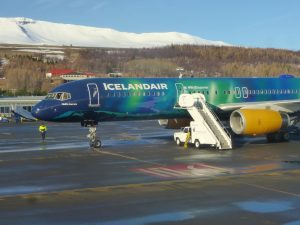 The aircraft were spaced at different altitudes so they would not interfere with each other. We could see the other jets during the turns, but not at all during the eclipse. Somehow Icelandair worked out positioning of a few hundred other aircraft chasing the aurora. In my plane, we had 2 people per row, so we shared a window for viewing. Refreshments included coffee, juice, and Icelandic twisted donuts, so this eclipse was extremely comfortable to watch. 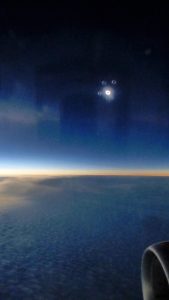 The sun was straight out off the right side of the aircraft, so once we were in position it was easy to watch the show. We could watch the shadow of the moon racing across the surface of the Earth below us. When the sun was eclipsed, I could look down and see the dark spot on the ground and the sunset and sunrise on either side of the shadow. It was a bit tricky to photograph, with reflections from the window, but you get the idea. It’s very different from the view from land. If you ever get the opportunity to view an aurora from the sky, take it!

I took about a hundred pictures of the eclipse. Here’s one for now. If you look closely you can see the red solar prominence on the edge of the disk. I was surprised these were visible because the supermoon that caused the eclipse blotted out more of the sun than usual. 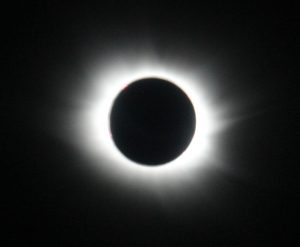