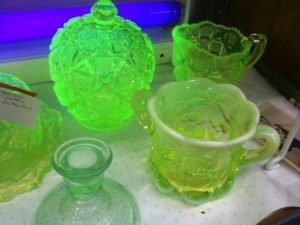 Question: What Is Uranium Glass or Vaseline Glass?

Uranium glass fluoresces with a characteristic green light under ultraviolet or black light. Uranium glass is sometimes known as Vaseline glass because its greasy appearance is akin to that of petroleum jelly. Here’s a look at what uranium glass is and how it is used.

Answer: Simply put, uranium glass is glass that contains uranium. Usually uranium is added to glass before it is melted as a diuranate oxide. Modern uranium glass is about 2% uranium, by weight, although some 19th century pieces contain as much as 25% uranium. The glass comes in shades of yellow and green, although other colors are possible if additional metals have been added. A Geiger counter will register radioactivity from some uranium glass, although it is not sufficiently radioactive to pose a health hazard. Uranium glass is called “Vaseline glass” because the milky, greasy appearance of the glass resembles that of petroleum jelly.

Test to See If You Have Uranium Glass

Most uranium glass was produced before the 1940s, but some contemporary glass and synthetic gemstones contain enough uranium oxide to register using a Geiger counter and to glow under a black light. If you have a black light, it’s easy to test glass. Most uranium glass is yellow or green, although sometimes you’ll see it in pale blue glass, too. The usual glow color is green.