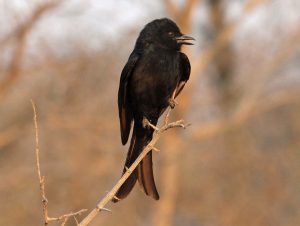 The fork-tailed drongo is a common sight in the Kalahari Desert of Africa. These black birds give off a loud, easily identified cry when predators are around. This cry is distinctive enough, other animals will hear them and drop whatever they were doing to avoid danger. This watchdog bird is the smaller, edible creatures’ early predator warning system. They are also notorious thieves.

The fork-tailed drongo is famous for ‘crying wolf’ like the boy in Aesop’s Fables. They give the alarm cry while the other animals are eating. Their victim drops their food and scampers off allowing the drongo to swoop in and get a free lunch. Some estimates have about a quarter of the drongo’s food coming from this behavior. Over time, these birds learn the lesson of the boy in Aesop’s Fables. The drongo can cry ‘wolf’ too many times. The other animals stop paying attention to him.

Biologists have reported in May 2, 2014 issue of Science the drongo learned a different lesson. Instead of ‘It is better to tell the truth’ like the Boy who Cried Wolf, the birds tell different lies. The biologists discovered the drongo will mimic the danger calls of other species. They observed that drongos carefully watch their intended victims. When the victim turned up a juicy tidbit, the drongo would give the drongo danger call. If their victim ignored this call, they would repeat it. If the victim still would not react, they would give a call that sounded like the victim’s warning call. This would usually have the desired result. The victim would panic and get the drongo would get a free meal.