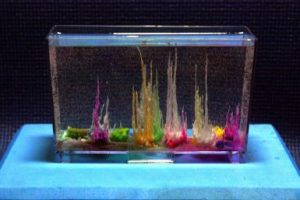 Water glass is the common name for an aqueous solution of either sodium silicate or potassium silicate. It’s also called “liquid glass”. It gets its name because it’s essentially glass (silicon dioxide) in water. As the water evaporates, the solution solidifies into a glassy solid.

The most common formula is Na2(SiO2)nO, although K2(SiO2)nO is also a form of water glass.

Appearance: Colorless when pure, common pale green or blue from iron-bearing impurities. The solid is usually a white powder that dissolves in water to yield an alkaline solution.

Discovery: Around 1940 Jean Baptist van Helmont observed water glass as a fluid produced by melting together sand and excess alkali. The chemical was defined in the 1892 translation of Von Wagner’s Manual of Chemical Technology.

Manufacture: Quartz sand and alkali are reacted in either the liquid or solid phase to produce water glass. Sodium carbonate or caustic soda are common alkaline materials used in the process.

Water glass is used to make silica gel beads or packets, which are used to protect clothing and electronics from moisture. The chemical is used in passive fire protection, to make cements, to stabilize bore holes when drilling wells, in the manufacture of cardboard, as a flocculant in waste water treatment, for food preservation, for automotive repair, and in the processing of lumber and textiles. Water glass is used as the “magic” ingredient for making Magic Rocks. Placing freshly laid eggs in a water glass solution seals the pores of the eggs against bacteria and gases, so it can be used to preserve eggs when refrigeration isn’t an option. Liquid glass is also used to harden artificial stone. It is a naturally occurring chemical in some mineral baths, such as Iceland’s famous Blue Lagoon.