This waves word search contains glossary terms associated with the study of waves and wave motion. 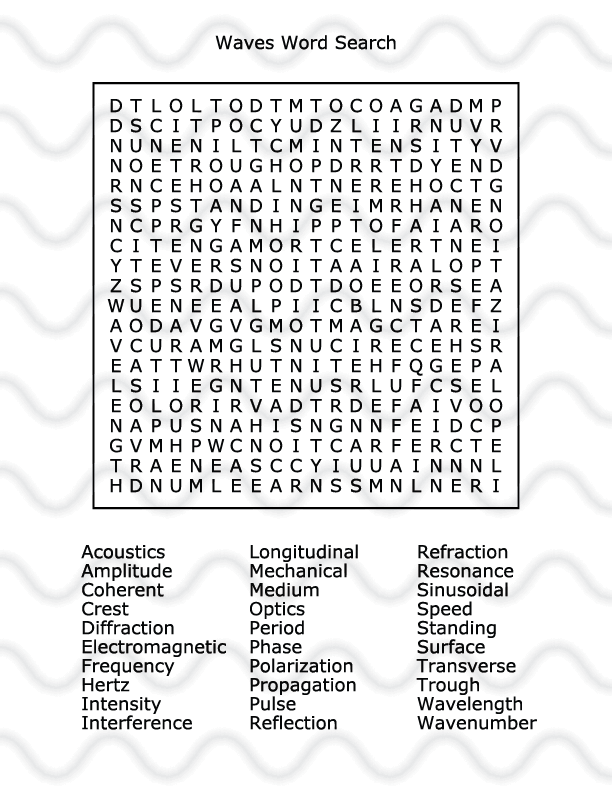 Find the words from the list forward and backward in vertical, horizontal, and diagonal directions.

The puzzle is optimized to fit on a standard 8.5″x11″ sheet of paper, but it fits nicely on A4 paper. Use the provided PDF for best results.

If you need a little help finding one or all of the glossary terms, a solved version of the puzzle is available.

Word searches are a fun activity. Check out our other science-related word search puzzles.

Quick definitions of the terms used in the Waves Word Search.

Acoustics: The study of sound waves.

Amplitude: The measure of the displacement of the wave from its rest position.

Coherent: Two or more waves with the same frequency and phase difference.

Diffraction: Behavior of a wave after encountering a gap or obstacle.

Frequency: Frequency is the measure of how many complete waves occur in a specified period of time. The most common measurement of frequency is cycles (or waves) per second.

Intensity: The measurement of the amount of wave energy over time (power) per unit area.

Interference: Resulting wave when one wave meets another wave.

Medium: Matter in which waves move through.

Optics: Study of the behavior of light and vision.

Period: The amount of time necessary to complete one complete wave. The period is the inverse of frequency.

Polarization: Polarization refers to the direction a wave oscillates.

Pulse: A pulse is a non-periodic wave with at least one major crest.

Reflection: The change in direction of a wave when encountering a barrier without leaving the medium.

Refraction: The change in direction of a wave caused by the wave passing from one medium to another.

Resonance: The increase in amplitude caused when one wave oscillates at a frequency very close to the same frequency of another wave or vibrating substance.

Sinusoidal: The name of the mathematical curve describing a smooth periodic oscillation.

Speed: The speed at which a wave travels. The speed of a wave is calculated by the wavelength multiplied by the frequency of the wave.

Standing: A standing wave is a wave where the position of the wave does not change.

Surface: A surface wave is a wave which behaves like both a transverse wave and a longitudinal wave.

Transverse: A transverse wave is a wave where the vibration motion is perpendicular to the wave’s direction of motion.

Trough: The lowest point of a wave’s displacement.

Wavelength: The distance from one point of a wave to the same point in the next wave.

Wavenumber: The number of wavelengths per unit distance.