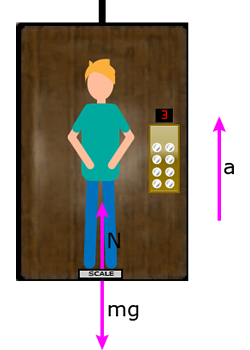 Let’s consider ‘up’ as the positive direction. When an elevator starts to accelerate upwards, you and your scale experience the same acceleration. The floor of the elevator pushes you and the scale upwards. This means the scale has to push on the person with an extra force to push you and your weight up too. The new Normal force is greater than just your weight alone. Let’s add up the forces acting on you.

According to Newton’s second law, the forces acting on you are:

The scale reads the Normal force, so it reports your weight as greater than it was at rest. 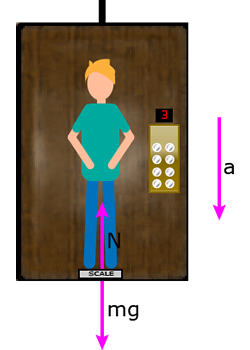 Now let’s look at the elevator accelerating down. We’ve set down as the negative direction, so the sum of the forces are:

The same two forces are at work as when the elevator was accelerating up.

The scale will read the Normal force which is less than it was at rest.

Example Problem:
A 75 kg man stands on on a scale in an elevator. When the elevator begins to rise, the scale reads 100 kg. What was the acceleration in factors of g?

Solution:
The scale is reading the Normal force. Using the equation we found for elevators moving up:

At rest, the Normal force was

Divide one equation into the other to find a ratio.

One thought on “Weight In An Elevator – Inertia Example Problem”