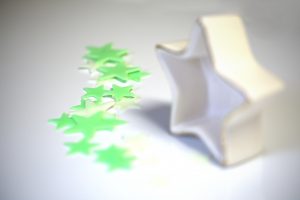 Modern glow in the dark stars are much brighter than the old glowing stars. (Carol VanHook)

Did you have glow in the dark stars on your ceiling as a kid? The old stars would glow green (sometimes orange or yellow) and faded fairly quickly. If you were to get glowing stars to put on your ceiling today, chances are they would glow much more brightly, last longer, and be available in more colors. The reason is because the chemical composition of stars and other glow in the dark materials has changed.

What Glow in the Dark Stars Are Made Of — Phosphorescent Materials 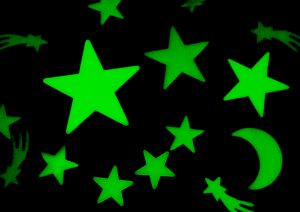 Zinc sulfide glow in the dark stars only glow this bright under a black light. Once you turn the lights out, the phosphorescence becomes much more dim. (Kat, Flickr)

Glow in the dark stars consist of plastic containing a phosphorescent powder. Back in the 1970s, the only glowing pigment was zinc sulfide, which emitted green light. Zinc sulfide remains the most commonly used phosphorescent pigment today because:

In 2000, improvements were made in zinc sulfide pigments, including combining it with more effective phosphors to get a pink-red and orange glow. Zinc sulfide still produces some of the best red and orange glow, but none of its colors glow very brightly or for very long. 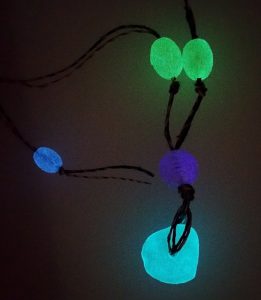 The best and brightest glow in the dark pigment is a strontium aluminate doped with europium. More generally, a phosphorescent pigment is an alkaline earth metal aluminate, typically doped with europium, dysprosium or another rare earth. The specific composition depends on the phosphorescent color. The alkaline earths may include strontium, calcium, barium, or magnesium. Silicon and titanium may also be found in some formulations. Uncharged pigments appear as a white powder. These pigments usually are damaged by acids and water, so they need to be coated to protect them for certain applications.

Some example chemical composition of glow in the dark materials include:

As you might expect, it’s extremely helpful to charge these pigments using a black light. Purple and blue are so close to the ultraviolet, you need the energy to get a good glow. The green and aqua pigments can get enough energy from sunlight or bright indoor lighting (or your cell phone flashlight).

If you’re familiar with the old zinc sulfide stars, you can see modern phosphorescent pigments are way brighter. You can see in the picture I took of a necklace I made that the glow is bright enough to illuminate the area and cast a shadow! Also, these oxides phosphoresce for a long time… several hours. So, if you paint stars on the ceiling using paint made from these pigments or get stars made from the material, your “night sky” will glow all night long.

Getting a Good Glow Pigment

As with all chemicals, there are different levels of purity available on the market. Also, particle size makes a big difference in how bright the glow will be and how long it will last. Larger particles glow brightly and for a long time, but also may appear granular (because they are). Suppliers grade the pigment, with 0 being the best quality, 1 good, and higher numbers less-good. The best pigments are expensive, so if a price seems to good to be true, it probably is. Trying to save money by ordering the pigment and mixing your own formulation is possible, but if, for example, you want to make a water-based paint, you’ll save yourself a lot of disappointment if you order coated particles or pre-mixed paint (made with a formula known to work).

If you’re interested in what I used for the necklace, it was this sample pack

of glow in the dark acrylic paints, available at Amazon or directly from the manufacturer. I painted 2 coats onto clear acrylic beads. If you coat a surface with phosphorescent paint or powder, try to use one that is white or mirrored for the best glow. Transparent objects look cool too, don’t you think? I sealed the beads with acrylic to waterproof them with no noticeable loss of brightness.

Got questions? Comments? I’m happy to try to answer them. I love things that glow…

9 thoughts on “How Glow in the Dark Stars Work”