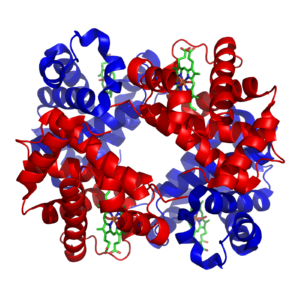 Proteins are a large class of biological molecules consisting of chains of amino acids called polypeptides. A single polypeptide can make a protein, although many proteins consists of multiple polypeptide subunits.

Proteins perform important functions in organisms. In fact, this class of molecules is found in every cell and is essential for life. Here are some examples of functions performed by proteins:

Each polypeptide is a linear molecule made from a string of amino acids that are bonded into a chain by peptide bonds. An organism’s DNA or RNA codes for the sequence of amino acids that form proteins. Building each amino acid chain from the genetic code is termed translation. Once a polypeptide has been translated, it usually undergoes additional chemical changes, called posttranslation modification.

Proteins are common in everyday life. Most of the structure of organs and tissues consist of proteins. Here are some examples: