Home » Science Notes Posts » Measurement » What Is a Jiffy? 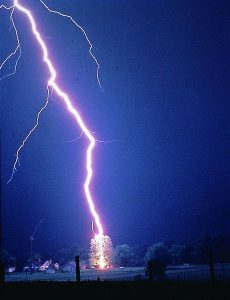 Lightning striking a tree in a jiffy. Jiffy was once slang for lightning. Credit: NOAA

I’ll be finished in a jiffy!

What does that mean? What is a jiffy anyway?

A jiffy is a measure of time. Sometime in the 18th Century, a jiffy was slang for ‘lightning’. In the 20th Century, American chemist, Gilbert Lewis proposed the jiffy should be the time it takes for light to travel one centimeter.

Electrical engineers use a jiffy as a measurement of the period of alternating current cycles. In the United States, AC power operates at 60 cycles per second. Period = 1/frequency, so a jiffy is 1/60 second or 17 milliseconds. In Europe and parts of Asia, AC power operates at 50 cycles/second. A jiffy there is equal to 0.02 seconds.

A jiffy is also a variable time in computer science. A jiffy is equal to a single clock tick between interrupts. A jiffy is on the order of 1 to 10 milliseconds.

What ever your scientific field, a jiffy is a really short amount of time.