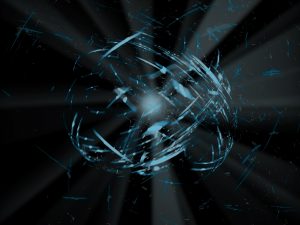 An electron is a unit of matter with a negative electrical charge. (Anne Helmenstine)

Atoms are made of protons, neutrons, and electrons. Of these three particles, the electron has the smallest mass. Here is the definition of the electron, along with its word origin, history, and interesting facts.

An electron is a stable subatomic particle with a negative electrical charge. Each electron carries one unit of negative charge (1.602 x 10-19 coulomb) and has a very small mass as compared with that of a neutron or proton. The mass of an electron is 9.10938 x 10-31 kg. This is about 1/1836 the mass of a proton.

A common symbol for an electron is e–. The electron’s antiparticle, which carries a positive electric charge, is called a positron or antielectron. A positron is denoted using the symbol e+ or β+. When an electron and a positron collide, both particles are annihilated and energy is released in the form of gamma rays.

Where to Find Electrons

In solids, electrons are the primary means of conducting current. This is because protons are bound within the nucleus, so they are not as mobile as electrons. In liquids, current carriers are more often ions. Interactions between the electrons of atoms and molecules produce chemical reactions. Chemical bonds form when electrons are shared between atoms.

The possibility of electrons was predicted by Richard Laming (1838-1851), Irish physicist G. Johnstone Stoney (1874), and other scientists. The term “electron” was first suggested by Stoney in 1891, although the electron was not discovered until 1897, by British physicist J.J. Thomson.

Although electron sciences dates to the 19th and 20th centuries, the words “electron” and “electricity” trace their origins to the ancient Greeks. The ancient Greek word for amber was elektron. The Greeks noticed rubbing fur with amber caused the amber to attract small objects. This is the earliest recorded experimentation with electricity. The English scientist William Gilbert coined the term “electricus” to refer to this attractive property.