Question: What Is Pi Day? When Is It? 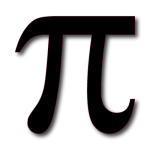 Know this symbol before Pi Day! This is Greek letter pi, which is used to denote the number pi.

Answer: March 14 (03/14) is Pi Day, in honor of the number named pi. Pi is the ratio of a circle’s circumference to its diameter, which comes out to be 3.14159… (The calculation has been carried out past a trillion digits so far). Pi is an important mathematical constant, so a day was designated to honor it.

How to Celebrate Pi Day

There are lots of ways to honor the number pi: