Home » Science Notes Posts » Science History » Who Is the Father of Chemistry? 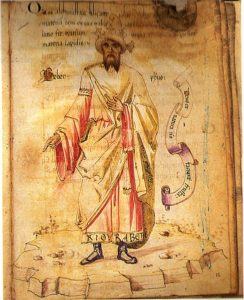 If you’re ever asked to identify the Father of Chemistry for a homework assignment, the “most correct” answer for a test will be the one found in your textbook. However, that may not be the answer others would give when asked the question.

The first chemist actually was a Mesopotamian woman, Tapputi, who described the process of distillation. She might be called the Mother of Chemistry, but really didn’t engage in science in the modern sense of the word.

Jabir ibn Hayyan or “Geber”, as he was also called, applied the scientific method to the study of alchemy circa 800 AD. Many people consider him to be the Father of Chemistry. Another popular choice for the title of Father of Chemistry is Antoine Lavoisier, who listed elements, described properties of matter, helped to revise and standardize chemistry nomenclature and made a host of other contribution to the field of chemistry. Lavoisier sometimes is known as the Father of Modern Chemistry, to distinguish his work from contributions made before chemistry was a true science.

Geber and Lavoisier aren’t the only people who have been called the “Father of Chemistry.” Robert Boyle, John Dalton, and Jöns Berzelius are other candidates for the title.