Home » Science Notes Posts » How Stuff Works » Why Is the Sky Blue? Science of Blue Skies and Red Sunsets 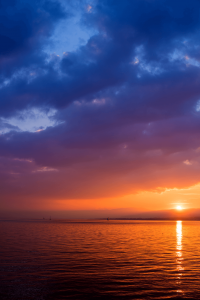 Why is the sky blue? This is one of the classic small child questions that many adults answer with vague “just because” answers. The real reason the sky is blue because gas and dust in the atmosphere scatter blue light.

You’ve seen pictures of the sun taken from space, so you know it looks white or faintly yellow. You know the air in the atmosphere mainly looks clear and colorless, so you may be wondering why the sky looks blue. The answer has to do with the nature of sunlight and the composition of the Earth’s atmosphere.

Why the Sky Is Blue

Sunlight appears one color, but what you perceive as white light is really a mixture of colors. You can use a prism to separate light into its spectrum (the rainbow) to see this for yourself. When light enters the atmosphere the colors react differently to gas molecules and small particles in the air. Even though the atmosphere looks clear, it contains tiny particles of dust, ash, and water droplets. Shorter wavelengths of light, like violet and blue, are scattered by these particles. Scattering at a wavelength of 400 nm is 9.7 times more intense than scattering at wavelength 700 nm. This effect is called Rayleigh scattering after Lord Rayleigh, who described the effect.

Longer wavelengths, like orange and red, are not scattered as much by the particles. So, the overall appearance of a clear sky is blue.

Why the Sky Near the Horizon Is White

Near the horizon, you may notice the blue of the sky fade into a paler color or becomes white. This is because the Earth’s surface reflects back light. It reflects back pretty much all the colors of visible light, so you see white light.

The color of the sky around the sun also appears white, but this is due to a process called Mie scattering. Mie scattering does not depend so much on visible wavelength, so the overall effect is white light. Mie scattering is also responsible for the white appearance of fog and mist.

Why Sunrise and Sunset Are Orange and Red

The more atmosphere sunlight has to pass through before reaching your eyes, the more pronounced the effect becomes. At sunrise and sunset, light has to pass through the atmosphere at an angle before you see it. This means there is more air and more scattering. Nearly all the blue light is scattered, so you see more yellow, orange, and red. If there is dust or pollution, the color difference is intensified, so you could see a blood red sky and even the color of the sun may appear red.