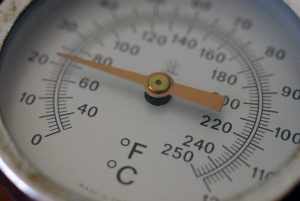 When you write a temperature using the Celsius, Fahrenheit, or Rankine scales, you include a degree symbol. Have you ever wondered why there is no degree in Kelvin?

The answer has to do with the definition of a degree. A degree is a change in temperature that is measured against a scale. The size of a degree is arbitrary. For example, originally the Celsius scale was set such that 0°C was the freezing point of water, while 100°C was the boiling point of water. Why water? Because it’s familiar and makes sense to people. But, the temperature scale could as easily have been designed around the freezing and boiling points of methane. You could even design your own temperature scale around what you consider to feel hot and cold. If you did so, your scale would use degrees. The old Celsius scale and your personal scale are examples of relative temperature scales. (Before you get all feisty… yes, the modern Celsius scale is based on absolute zero and the triple point of water, but there are still reasons why it uses degrees. We’ll get to that in a moment.)

Why Kelvin Doesn’t Have Degrees

A degree of the Celsius scale may seem like Kelvin, just bumped up 273, but if you double a Celsius temperature, you don’t double the thermal energy. Doubling 20°C gives you 40°C, which feels a lot hotter, but isn’t very meaningful from the thermodynamic perspective. Even worse, what if you double -40°C? Do you get -80°C or -20°C? You can see why scientific formulas often ask for Kelvin temperature.

Why Does the Rankine Scale Use Degrees?

Zero on both the Kelvin temperature scale and the Rankine scale is absolute zero, so you might be wondering why Rankine temperature is reported in degrees. It has to do with the size of the unit. The Rankine degree (temperature interval) is defined to equal a Fahrenheit degree. A temperature of 459.67 °R exactly equals 0 °F. Fahrenheit, like Celsius, has degrees defined around the freezing and boiling points of water. It’s nit-picky, right? To be honest, some people consider Rankine a unit, just like Kelvin, but the National Institute of Standards and Technology (NIST) advises against using the degree when citing Rankine temperatures.

Why Use the Kelvin Scale? 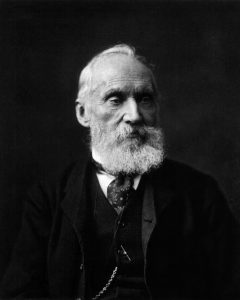 Aside from avoiding mathematical problems, like you might get dealing with negative numbers in other temperature scales, there are two other reasons to use the Kelvin scale. First, K is the approved SI unit (metric unit), so it’s the standard scale all over the world. Yes, the United States uses Fahrenheit, but that’s mainly because the degree size is so handy for expressing body temperature and weather. For science, even Americans use Celsius and Kelvin.

2 thoughts on “Why There Is No Degree in Kelvin Temperature”