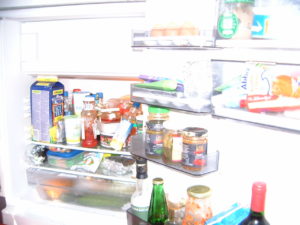 You shouldn’t store open cans in the fridge because metals and BPA can leach into food. (maerzbow)

When you don’t finish an open can, you may be tempted to put some plastic wrap over it and put it in the refrigerator for later. However, it’s not a good idea to store open cans in the fridge. No, it won’t grow Salmonella or give you botulism. The risks are more subtle.

Reactions Between Food and Open Cans

Bacteria don’t care whether you store leftovers in their can or your mom’s favorite Tupperware. The two potential health concerns are leaching of plastic residues and leaching of metal into the food.

Acidic foods (e.g., tomato sauce) react with the exposed metal rim of an open can and leach tin, iron, aluminum, etc., into the food. Don’t get too worried. The USDA Food Safety and Inspection Service reports “can corrosion” takes several years in an unopened can and isn’t a significant concern even in an open can. If metal leaching scares you, just be sure you cover the can with plastic and not the original metal lid the can opener cut off. That leftover soup you had for lunch should be fine in the can, while pineapple would do better in a new container.

Plastic leaching in an open can isn’t significantly worse than leaching from the unopened can. Realistically, the extra time in the refrigerator isn’t going to cause additional problems. Yet, you should be aware of Bisphenol-A (BPA) in food packaging. BPA is found in the plastic linings of cans, which are there to protect you from metal leaching, primarily from the solder used to weld the cans. In the body, BPA mimics the steroid hormone estrogen. Whether or not the chemical increases risk of disease is debated by the scientific community. The US EPA has a list of food packaging that contains the chemical.

The Real Reason Not to Store Open Cans in the Fridge

According to Carl Batt, a food microbiologist at Cornell University, the real reason you shouldn’t keep open cans in the refrigerator is because it causes the food to tasted “canned.” It’s harder to get a good seal over a can to keep foods from drying out or sucking up other flavors/scents from the enclosed space. While leaching of plastic residue or metal into the can probably isn’t a big health concern, it can definitely affect flavor.

What You Should Do

Even though it creates more dishes, you should transfer leftover food from the can into a different dish. Seal it and then refrigerate it. Aside from looking a lot classier in the fridge, the food will taste better when you retrieve it for another recipe.