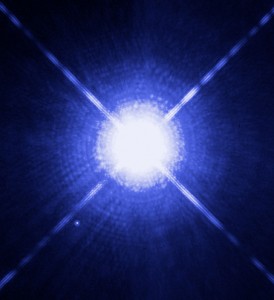 Hubble Space Telescope photograph of the binary star system Sirius. The large bright star is Sirius A and the smaller dot below and left is Sirius B. Together, they are the brightest star in the night sky. Credit: NASA

When you look up at the stars, one of the first things you may notice is some are brighter than others. Early Greek astronomers believed all the stars were the same distance from us, so brighter stars must be bigger stars. They catalogued the stars by their “magnitude”. The magnitude scale is still in use, but only in name. A star’s brightness is still known as its magnitude, but the magnitude a logarithmic scale based on the apparent brightness compared to the star Vega.

The apparent brightness of Vega is set to equal 0. Stars brighter than Vega will have magnitudes less than 0. Dimmer stars will have a magnitude greater than zero. The larger the magnitude, the dimmer the star. The Sun for example is much brighter than any other star in the sky with a magnitude of -27. The full Moon can have a -13 magnitude.

Measurements of starlight can be extremely precise with today’s technologies. The Vega magnitude system has been altered to use a numerical reference intensity rather than the perceived brightness of Vega. Today, most visible stars have been calculated. Which stars are the brightest? Here they are in order of apparent magnitude.