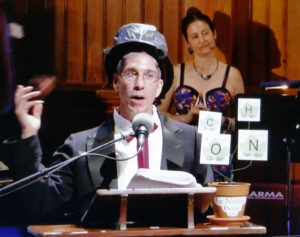 For the past 25 years, the Ig Nobel Prize has recognized scientific research that makes you laugh and then makes you think. The 2015 Ig Nobel prize includes an award, a piece of paper signed by actual Nobel laureates, and a cash award of 10 trillion dollars (Zimbabwe currency). The award is a lovely potted plant, minus the plant, but with stunning element symbols for carbon, hydrogen, nitrogen, and oxygen.

Callum Ormonde et al. of Australia, and the US for inventing a chemical recipe to partially unboil an egg. He used a hammer to demonstrate the technique, so it looked like more of a physical method to me. Guess it’s time to read the published paper.

Patricia Yang and her team for testing the biological principle that nearly all mammals (5 kg and larger) empty their bladders in 21 seconds plus/minus 13 seconds. The researchers call this the Law of Urination and explain it is due to the effect of gravity effect on the peepee pipe (apparently the technical term for the urethra).

Mark Dingemanse and his group for discovering that the word “huh?” or its equivalent exists in every language. They have no idea why…

Gennaro Bernile and team for discovering many business leaders discovered a fondness for risk-taking when they experienced natural disasters that (for them) had no dire personal consequences.

Jointly to Hajime Kimata (Japan) and Natalia Kamodyova and team (Slovakia) for experiments to study the biomedical consequences of intense kissing and other interpersonal activities. Sounds like the researchers may have used themselves as test subjects. Dr. Kimata hints kissing may help attenuate allergies, by the way (so get to it).

Elizabeth Oberzaucher and Karl Grammer for mathematical techniques to determine whether the bloodthirsty Sharifian Emperor of Morocco managed to father 888 children. The researchers apparently have confirmation of a man who fathered over 600 children. Apparently this takes considerable effort on the part of the man. You think?

Bruno Grossi, etc (Chile, US) for observing when you attach a weighted stick to the rear end of a chicken, it then walks in a manner similar to that of which dinosaurs were believed to have walked. You can get a similar effect if you stick a plunger on your butt, but it won’t be quite the same as the chicken walk.

Diallah Karim and team (many countries) for determining acute appendicitis may be accurately diagnosed by the amount of pain experienced from driving over speed bumps. (Yikes) So, if there is no doctor in sight, apparently this method is 97% effective. 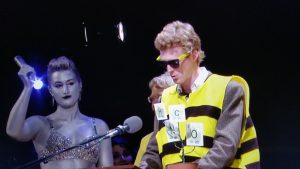 This man let bees sting him on his private parts for science!

Justin Schmidt for creating the Schmidt Sting Pain index (relative pain from various insect stings) and Michael L. Smith for arranging for honey bees to repeatedly sting him on 25 body parts to learn which locations are least painful (skull, arm) and most excruciating (nostril, upper lip, and genitalia). Smith said he conducted multiple trials on himself to verify the results.